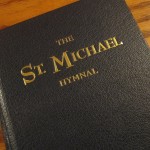 OLM is very proud of our St. Michael Hymnal. The choice of this beautiful, permanent hymnal took months of research, preparation and work. A subcommittee pulled together of parishioners here in the parish chose it to coincide with the publication of the new translation of the Roman Missal that was implemented in Advent of 2011. This hymnal was unique in that it was published by a parish (St. Boniface in Lafayette, Indiana) and not by a large corporation eager to profit from copyrights. Their pastor, Fr. Timothy Alkire, and their choir master, Linda Schafer, began this project to renew liturgical music in their own parish along the directives of the Second Vatican Council, which challenge us to preserve Gregorian Chant (giving it pride of place), but also to form a repertoire that will include traditional polyphony and hymnody. We have benefited from their effort to reclaim and restore the musical patrimony of our Church. When it was published, The St. Michael Hymnal was the only hymnal in our nation that actually included the entire contents of “Jubilate Deo” within its collection (a minimum repertoire of music in Latin which the Vatican requires all the Catholics to know).  In the last quarter century political correctness has also made our familiar hymnody less familiar – with our national dependence upon disposable worship aids and their constantly changing lyrics for the hymns. By contrast, The St. Michael Hymnal represents stability. It is a solid collection of classic and well-known hymns that adhere to their original text. This hymnal will include proven Catholics standards (including many beloved contemporary songs, as well as some jewels borrowed from the Protestant tradition). Cognizant of the realities of the American Church, with its immigration of Spanish speaking Catholics, The St. Michael Hymnal also includes a fine collection of Spanish music. Besides being the best collection of hymnody of any American hymnal, The St. Michael Hymnal has six Latin mass settings, as well as seven new mass setting in English (set to the new translation, and approved by the Secretariat of Divine Worship). Moreover it has a complete collection of entrance antiphons for Sunday masses by the distinguished American composer, Richard Rice. Simply put, The St. Michael Hymnal has become the new standard for hymnals in America. Click on the link below to learn more.