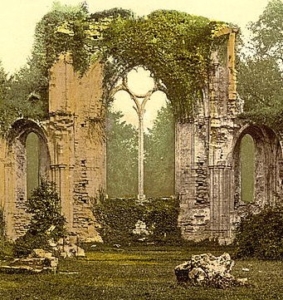 The history of the so-called Protestant Reformation is often whitewashed, so much so that folks imagine that there was some ground swell of Christians anxious to become Protestants.  Nice propaganda, but hardly true.  Consider the case of England.  Five hundred years ago when many of the English-speaking people were separated from the Catholic Church of their ancestors through the will of King Henry VIII, this separation was for them a traumatic event.  Anglo-Saxons had been Catholic for a thousand years, and they were good Catholics.  They weren’t on the fringes of Catholicism.  They were in the center of things.  They were great missionaries.  They influenced the whole Catholic world.  They were not only integrated into Catholicism, they were Catholic to the core.  They had received their Faith through the efforts of Pope Saint Gregory the Great, and it would take a lot to make them hate Rome and reject the papacy.  Someone would have to kill off the intellectuals, silence the old, bribe the powerful, burn the books, re-write history, and then indoctrinate generations of the youth.  And so they did.

In short measure and through the draconian decrees and tactics of one tyrant, the great monasteries and proud abbeys that had stood for centuries were pulled down into heaps of ruins.  The bones of the ancient saints were scattered to the dogs.  The tombs of the kings of old were abandoned and forgotten.  The wealth of the Church was privatized into the hands of political allies.  Statues of saints long venerated by the pious were piled upon flames.  Altars were ripped down.  And oh so many were martyred – abbots, monks, priests, lords, knights, and tens of thousands of others were hanged, beheaded, disemboweled, crushed to death, drawn and quartered, or cut down.  For Henry Tudor, nothing was sacred and no one could hide.  If you dared to say “no” to him, you would die.  Everyone must conform or else.  Everyone!  Thus did one king tear child from mother’s limbs and divorce a whole nation from the Church universal so that he could abandon his godly queen for the sake of his mistress – a woman he would soon divorce and behead after accusing her of adultery with her own brother.  That is a lot of stuff to whitewash, and it isn’t even the half of it.  Let’s just say it makes the Spanish Inquisition (which Protestants often invoke, but little understand) look like a walk in the park.  That isn’t to say that the Church didn’t need reforming.  It did.  But saints reform the Church, and Henry VIII was no saint.  Besides, you can’t reform what you leave, and these divisions caused wars for generations thereafter, so in the end, it would be hard to calculate the cost in human lives of Henry’s divorce.

Of course, we can’t blame any of this on the Anglicans or Episcopalians we know today, who can be nice neighbors.  Most of them were raised up in that tradition, and were never Catholic (though their ancestors decidedly were).  Moreover, we should love our separated brethren in Christ, because we are commanded to love by none other than our Lord himself, and through love, we might draw back together the scattered flock.  We certainly shouldn’t envy these communities.  Even Anglican bishops will admit that their church is dying (at least in the first world).  Some will say it is because of the moral compromises they have made with modern times, and others will insist it is because they need to become even more modern in their worship and morals.  In our own country, there are supposed to be 2.3 million Episcopalians.  To give us some perspective, there could easily be more Catholics in the Archdiocese of Atlanta than there are Episcopalians in the U.S.  Still, it is estimated that there are less than 800,000 practicing Episcopalians on any given Sunday in the U.S., and that number is evidently declining rapidly.  Just consider that the average age of an American Episcopalian is reportedly around 63.  And Anglicans were the first to welcome contraception, and now they have precious few children to carry on.  Sad.

Still, Protestantism in general is something of a shell game isn’t it?  The mainline denominations may be more and more abandoned, but we’re told Protestants are all going to so-called non-denominational mega churches that pop up for a season and are trending at the moment.  Some Protestants will try this or that for a while, stop going, play a season of baseball, and then maybe wander into something else later on, and try that for a while.  There are a lot of options when you’re looking for the perfect fit.  Evidently, once the divisions within Protestantism started, they did not end.  Some estimate that now there are over 40,000 Protestant denominations worldwide.  That is a lot of flavors to taste!

Now, non-Christians will point to these divisions as evidence that Christianity cannot be true.  Thus, these divisions cause scandal.  As Catholics, we believe in Christ, but we don’t think these divisions are of Christ, so we strive to work towards unity.  The single unifying center of our lives is, of course, the Eucharist.  It is in Christ that we find unity.  One of our stained glass windows is of St. Ignatius of Antioch.  It reminds us that we owe a debt to the Church in Syria (now under threat of genocide).  But St. Ignatius (who knew the apostles and who was martyred in A.D. 107) also had a lot to say about Christian unity.  He tells us we are saved by communion with Christ, and that we should avoid all divisions “as the beginning of evils,” and never to make schism in the Church!  He commands that we all gather around the same altar in the Catholic Church, lest we find ourselves separated from the kingdom of God.  He minces no words, does Ignatius.

But if divisions are present, how can we work towards unity?  Well, maybe we start with a sense of urgency to achieve unity.  Perhaps we also need to speak bluntly at times, too (as did St. Ignatius on his trip to Rome).  If we say, “I’m okay, you’re okay,” then we fail to heal the wounds of divisions.  Certainly, we also need a frank look at history, too.  The primary question we should ask ourselves as followers of Christ is this:  do we really think these divisions are willed by God?  In our Creed, we talk about the unity of the Church (one, holy, Catholic, and apostolic), as our Lord calls us to radical unity in Him.  That pretty much was the prayer that preoccupied His thoughts in the end – that we might be one as He and the Father are one (as we see in His priestly prayer found in the 17th chapter of John’s Gospel).  The Creed we say is called a “symbolon” in Greek.  The word means pulling us together, and the Creed draws us together as Christians.  Our Faith, and its shared tenets that make it recognizably Catholic, are what pulls us together.  The opposite of symbolon is another Greek word – diabolon.  The devil divides us.  The devil does not want us to be one.  He likes to make divisions within Christianity, he likes to make divisions within the Church, and he likes to make divisions within our parish and even our families.  The best way we can withstand him is in unity, but my, how we love to wander off, don’t we?