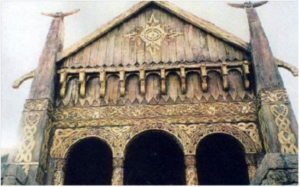 Probably the least interesting room in most houses today is the hall.  It is typically a narrow, windowless passageway beneath the apex of the roof with rooms to either side.  But halls are the oldest form of a house, because the hall used to be the whole building.  It developed from the Neolithic long houses of Europe, when there was but one room beneath an expansive roof.  In time, kings began to subdivide the space in their great halls and make other rooms, but originally, the hall was all there was.  The old sense of hall is somewhat still recalled in our parish halls, which are larger places where we gather to eat, or in the university buildings that are still called halls.  But from where does this idea come?

If you have read any of The Lord of the Rings stories, then you are probably familiar with Meduseld, the King’s Golden Hall of Edoras of Rohan.  J.R.R. Tolkien was a professor of lost languages and literature, and he used his love of language throughout his books.  For example, the name Meduseld is actually the old Anglo-Saxon word for mead hall.  Tolkien also found inspiration in the old Anglo-Saxon poem Beowulf, which was all but forgotten by most scholars in the world until Tolkien challenged them to look at its artistic merits.  Beowulf was written nearly 1300 years ago and it took place in old Zealand, where the Dane King had his mead hall, called Heorot.  Tolkien was writing less than 100 years ago, and yet he used Beowulf to help him create his own mythical Middle Earth.

Archaeologists now and then unearth the sites of these once great halls.  On the high hill of Tara in Ireland, for example, we know there once stood the High King’s Hall nearby the standing stone of destiny where the ancient kings of old were crowned.  Tara may have even been a place of political significance since the Neolithic Age.  Certainly it was still important when St. Patrick lit his paschal fire in defiance of its Druid king in A.D. 433.  But similar halls were also known in Germany and Scandinavia.

Mead halls were dry, warm sanctuaries built high upon hilltops overlooking an otherwise cold and windswept world inhabited by Celts, Vikings, and Anglo-Saxons.  They were houses of light in the dark ages.  These legendary halls were made of wood, often with highly carved columns, with high-pitched roofs and deep eaves.  Many shields would hang upon their walls, as trophies of legendary victories.  Inside fires roared, and warriors (called ‘œthanes’) gathered round their lord, earl, or king to drink from silver chalices and sing songs praising his past victory.  The lord would, in turn, reward them with his gifts of golden rings.  The goal of these thanes was to achieve legendary glory in this life so that their memories would live on in the heroic songs of the mead hall.  Courage was valued above all.  Those in the hall were kith and kin of the king, but visitors from foreign lands might approach the mead hall and request a visit.  If granted entry, they would leave their shields and swords at the threshold, and come into the presence of the king, bowing and doing him homage.  The king’s courtesy and ability to provide refuge reflected upon his own glory and wealth as well.

The similarities between those halls and our churches today should be obvious.  In our churches, we come before the King of Kings to sing of His glorious victory, and we recall His heroic contest and the contests of His saints of old, who live on in the halls of heaven, just as they live on in our collective memory as Church.  In our churches, we share in the King’s great feast, and know the sanctuary of His grace and protection.  We see our Mass as a foretaste of the heavenly banquet of the Messiah or King.

Heaven is also seen as a place of heroic halls.  There the King’s heavenly banquet is used as a metaphor for the joy of the afterlife spent with our Lord.  One of the prefaces for Easter reads, “Through Christ the children of light rise to eternal life and the halls of the heavenly kingdom are thrown open to the faithful.”  And a beautiful tenth century Advent prayer uses the same imagery saying, “At your second coming, set us free, so that when the world is filled with light and you judge all things, we may be clad in spotless robes and follow in your steps, O King, into the heavenly hall.”

Our Catholic Faith is so rich with this imagery of kings and halls and banquets, but as we celebrate the great, great solemnity of Christ the King, we might reflect upon our parish church as a hall which points us symbolically to that great hall in heaven, where we hope to one day share in the heavenly banquet of our Lord with all the saints.  If we keep that faithful vision alive in our hearts, and live with that hope, then we find the courage to face our own deaths, and in the meanwhile, we will be able to live out our faith heroically.