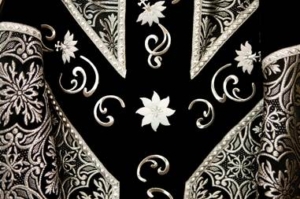 When we go to a funeral of a non-Catholic, we can sometimes come away feeling empty.  There are three or four predictable hymns that seem to be the required repertoire, though few mourners may feel like singing.  An uncomfortable pop-song might be offered.  The room is often thick with the grim smell of lilies, which only adds to the maudlin sentimental mix.  There might be a reading or two, but really the emphasis isn’t on scripture nor on the prayers, but rather on personal reflections.  Non-Catholic funerals are all about “saying some words over the deceased.”  Consequently, there can sometimes be two sermons and even a couple of eulogies (which can be embarrassing to endure).  The “words” are unscripted and can sometimes sound more like a speech at a retirement party.  At other times, these “words” are a kind of canonization of the deceased, for everyone is presuming that their loved one is already a saint singing with the angels.  No matter how tragic the death may have been, those who need to process their grief are often denied that sincere need, and are rather obliged to “celebrate,” because non-Catholics are now calling their funerals “Celebrations of Life.”  Still, they never really feel very celebratory.  Certainly for those of us who are used to Catholic funerals, the whole thing seems so lacking.  Sadly, in far too many Catholic parishes, our own funeral rite has become blurred and confused.  Instead of leaving the eulogies for the wakes, gravesites, or post funeral gatherings, parishes are starting to allow “saying some words over the deceased” to creep into the ritual of our Church, and the music can be all but indistinguishable from a non-Catholic “Celebration of Life.”

But by contrast, the Catholic Funeral is not about these sentimental innovations, but rather it is about ritual – ritual that has evolved for two thousand years, and ritual that prescribes constituent parts that make it recognizable as a Catholic Requiem Mass.  First, the casket is brought into the Church, solemnly draped with a white pall, a symbol of hope.  The cantor intones the ancient chants of the Requiem Mass (found in both Latin and English in our parish pew books).  The readings are normative and come from a canon of officially suitable texts, and the Holy Sacrifice of the Mass is offered for the repose of the soul of the deceased.  The priest by tradition vests in black, and the people are likewise often dressed in dark colors of mourning.  Perhaps the most memorable part of the ritual is when the Subvenite and the In Paradisum are chanted as the casket is incensed for the final time and thereafter, taken from the church to be buried in hallowed ground.

In some ways, this structure and solemn rite is one of the most dignified rites of our Church.  Our Catholic funeral is wrapped in Scripture and it allows the ancient prayers and chants of our ancestors to wash over us together with our deceased loved one.  Catholic funerals allow us reflect upon the tragedy of death while at the same time, they give us hope because death has been overcome by Christ.  And, of course, the most important difference is that a Catholic funeral is about praying for the deceased.  The casket is brought into the presence of Christ and placed before His altar so that we might plead for the deceased in the most sublime way we know, and see his/her death in light of the death and resurrection of our Savior.  We, as Catholics, do not presume that all the dead go immediately to heaven.  Our piety requires us to pray for the deceased, and to pray that they may know God’s mercy, for even the just man sins seven times a day and our Lord has called us all to perfection.

Authentic Catholic funerals are filled with consoling prayers that allow us to mourn and to cry in both sadness and in hope.  At these times in our lives, the whole range of human emotion can pour forth into our hearts, where our gratitude to God for the life of the deceased is accompanied by our acknowledgement that death is really, really awful, even as we hope in heaven and look forward to the resurrection of the dead.  We can be surrounded by loved ones, but can be acutely missing the one we are burying.  We can feel angry and sad and relieved and overwhelmed and grateful, all at once.  And with each loved one we bury, we also face our own death in some small way, with just a bit of apprehension, if not some serious fear and trembling.  All the beliefs that we have as Catholics about sin and death and God’s justice and mercy and love all collide together at one time at funerals, and so our ritual allows us to grapple with these paradoxes, in hope.

At this time of the year when we pray for the dead, perhaps it would be valuable for us to prayerfully listen to some Requiem Masses.  Music can and should help us to pray, and music has such an ability to express paradoxes, and to get at truths that words cannot fully express.  There are so many beautiful compositions of these Requiems that can be found online.  A good one to start with is Faure’s Requiem, this one directed by Robert Shaw and performed by the Atlanta Symphony, which can be heard here (Gabriel Faure’s Requiem Op.  48 Complete (Best Recording ).  This sublime and dignified music inspires such supernatural hope in Christ’s grace.  Of course, when we die, we won’t have a full symphony and a great chorus singing at our funerals, but these same beautiful prayers from the Requiem Mass should nevertheless be a part of any authentic Catholic funeral, and listening to them now can perhaps help us process our own grief that we feel at the loss of a loved one, but also can help us better face our own mortality.

Let us then pray for the deceased, but also let us never forget the comforting teaching of the Apostle Paul who, when writing to the Roman Church, said these words, “For the wages of sin is death, but the gift of God is life eternal in Christ Jesus our Lord.”