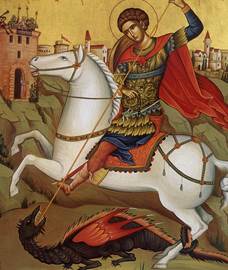 Our state of Georgia was originally a colony named for an English monarch who had this saint’s name.  But Saint George was never in Georgia, nor for that matter in England.  Saint George was martyred in A.D. 303 in the city of Nicomedia.  His mother was Palestinian and his father was a Greek officer from Cappadocia serving in the imperial army of Rome, a career path that his son would also follow.  Their family was noble, yet his parents named him “Georgios” (meaning farmer).  Beyond these few details, the story of George’s life is otherwise more the stuff of legend than history, and yet perhaps because of his family’s international origins, this saint quickly became one of the most venerated in the Church (east or west).

It is said that George gave witness to the Faith under the persecutions of Diocletian, whom George knew personally.  Those persecutions were ruthless, and would even make a victim of the empress herself (as Diocletian would learn his own wife was Christian).  By refusing to make official sacrifices to the pagan gods, George’s Catholic Faith became public.  The saint was tortured and then executed by decapitation on the 23rd of April.

Later Byzantine iconography would sometimes depict Saint George as a knight slaying a dragon.  This image resonated well with the European Crusaders who prayed by the tomb of Saint George in the Holy Land.  This isn’t Cryptozoology (a pseudoscienceinvolving the search for animals whose existence has not been proven).  Here the dragon represents Satan and is emblematic of the forces of chaos and darkness.  The twentieth century English Catholic theologian and author, G .K. Chesterton, reminds us that, “Fairytales don’t tell children that dragons exist; children already know that dragons exist.  Fairytales tell children that dragons can be killed.”