Praying for Our Bishops! 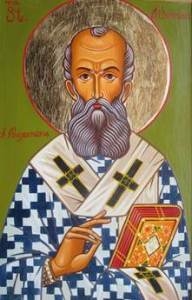 The African patriarch, St. Athanasius (296-373), was the archbishop of Alexandria, Egypt, one of the most important cities in the classical world.  Almost three hundred years earlier, St. Mark had founded the Church in Alexandria (these days, when we see so many persecutions of Christians by Muslims in places like Egypt, we forget just how ancient Christianity is there, much older than Islam by far).  Athanasius was Alexandria’s archbishop for an astonishing 45 years, though 17 of those years were spent in exile, as five times he would be ordered out by four different Byzantine emperors.  Beyond that there were other times when he fled the city to keep from being killed by his own people.

In Athanasius’ time, the persecutions of the Christians had only recently ended and many of the Church’s great teachers had been put to death.  It was a time of confusion.  Add to this confusion the fact that Alexandria was a place of great learning, and where there is great learning, there is also the tendency towards pride, and therefore, the risk of great error.  It was there that the priest Arius began his heresy, and the Byzantine emperors and most bishops and priests of the Church in Constantinople and throughout the world fell into this heresy.  Arians taught that Jesus, the Son of God, was not really God like God the Father was God (God the Father was the real God).

But Athanasius was also in Alexandria and he came from an old Catholic family, and he had studied under the masters who were martyred in the last persecution.  He understood Catholicism.  He had been the secretary of the previous archbishop, St. Alexander, and Athanasius had been to the Council of Nicaea.  The handful of the world’s bishops who remained true to the Trinitarian doctrine of our Faith looked to Athanasius as one of the few great men of his day willing to stand up against the pressure of so pernicious a heresy, and articulate so clearly the Catholic Faith.  Athanasius taught clearly in his day that which we hold and take for granted in our day, that Jesus was/is God, that Mary was/is the Mother of God (in that Jesus was God from the beginning), and that God is a Trinity of three persons in one divine substance (three persons, one God).

In many ways it seemed that Athanasius had to stand against the whole world of popular opinion to remain faithful in his office (Athanasius contra Mundum!).  As such, he is for us a great model of Christian leadership in that he did not follow the trends, no matter how popular they were, but spoke the truth of the Faith no matter what the consequences.  St. Athanasius is thus a great saint for orthodoxy in our Catholic Church, and his life warns us all that we must think as God thinks, and not as the world of men thinks.

The exiles of Athanasius are interesting and tell us something about the ancient world.  Athanasius often went west when he was exiled, so clearly he must have initially felt that in the west, he was somewhat beyond the reach of the Arian Byzantine authorities.  Athanasius lived two years in Trier (Germany) and over seven years in Rome (where he enjoyed sympathy from the popes), and Gaul (France).  But the tidal wave of heresy came west too, so his next exiles were into the Egyptian desert to seek out ancient monasteries where he could write and worship.  He even lived for some years in the tomb of his own father.  Thus did Athanasius hold fast to the Church’s ancient beliefs.  Since Athanasius was the steadfast defender of the Incarnation, it is appropriate that we should honor him at Our Lady of the Mountains with our icon and our prayers.

The lesson for us in the heroic example of Saint Athanasius is that even though his seemed a near solitary voice for truth in his day, Athanasius nevertheless had to speak out.  There are so many comparisons we might make with our culture today where folks who might call themselves Christians have the most curious notions about morality, marriage, and life.  As Catholics, we need to see our way clear on these issues (some of which are so self-evident and yet awash in confusion in our world) and speak the truth – about the Lord, about the Gospel, about natural law, and about the unchanging values and commandments.

The Church cannot change the Truth, but remains its guardian, and this Truth must be proclaimed, of course, when it is popular, but above all when it is not.  As our Church and our parish stand out, we might think, “Why can’t we be like everyone else and just do what they do?”  Okay, but shouldn’t we instead ask why the Church asks us to do what OLM is doing?  It is easy to say, “Everybody is doing it.”  It is better to ask, “What is the truth here?”

Our icon of St. Athanasius was hand painted in Georgia (the country, not our state), and it was given to our parish anonymously in honor of Deacon Lloyd and Jill Sutter, our first deacon and his wife, who have always had the strength, despite the trends of the day, to teach from the Catechism of the Catholic Church, and to be unflinching in their orthodoxy in our own confused age.  St. Athanasius, pray for us!