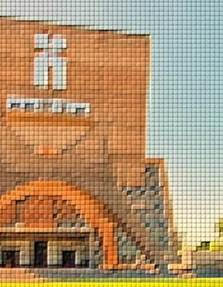 Some years ago, one of our neighboring churches here in Jasper, Georgia invited the Episcopalian Bishop John Shelby Spong to give a lecture, teach a class, and preach.  He is the retired Episcopalian bishop of Newark, New Jersey.  Spong has given lectures at Harvard and is a best-selling author.  He has been interviewed on television many times.  Indeed, Bill Maher called Spong his favorite theologian!

But however popular Spong may be, he is a controversial figure, even within Anglican circles.  Some years before Spong came to Jasper, an Anglican archbishop in Sydney, Australia refused to let Spong preach or teach there, claiming that Spong was a heretic.  Why?  Well it has been said that Spong has more or less denied every Christian doctrine and all but rejected the Nicene Creed.  That is a bold claim, but it seems the modernized “Jesus” Spong preaches is neither divine nor was he born of a virgin.  He had no stepfather Joseph, did not perform miracles, and did not say what the Bible says he said.  Spong does not see humanity as fallen nor as sinful, so there is no need of atonement.  Consequently, Spong’s “Jesus” neither died for our sins nor ever bodily rose from the dead.  One wonders why Spong continues to claim he is Christian!

Naturally, Bishop Spong is equally progressive on social issues.  He is a long-time advocate for promoting women and gays within the clergy, and for blessing same-sex “marriage.”  Spong even went so far as to suggest that the Apostle Paul was a repressed homosexual (as if he could somehow know this).  Spong issued a manifesto some years ago declaring he had won on these issues and would no longer engage in debates with anyone on these matters.  And, sadly, he pretty much has won.  At Spong’s retirement, his own diocese of Newark had thirty-five openly gay or lesbian clergy (let us also note that, at the same time, the diocese’s membership had been diminished by 40%).

This theological “modernism” of Bishop Spong arose out of Protestantism over a hundred years earlier.  Protestantism, by its nature, distrusted the authority of the Magisterium (the teaching office of the Church).  Protestants had emancipated themselves from the influence of the pope, the Vatican, and the Councils, which they found suspect.  And even though the early Protestants prided themselves on a deep belief in the Bible, in time, they began to apply that same distrust of authority to their Bible as well.  In this they began to erode their own declared doctrinal foundation.  Those who resisted this within Protestantism were called fundamentalists, because they held to certain fundamental truths.  However, the modern theologians of mainstream Protestantism gained more and more control.

If he were Catholic, Bishop Spong would pretty much embody what the Catholic Church calls the heresy of modernism.  Today we live in a pluralistic world where the intellectual thoughts of Protestant theologians touch and influence our own (especially in the discipline of scripture study, but also in the area of morality).  And so these trends towards distrusting authority and tradition and even scripture seeped into our own Catholic university systems.  The Vatican has condemned Modernism, but its ideas still influence some within our Church today.

Evidently it was Rousseau who coined the term “modernist” for someone who esteems modern times over antiquity.  Perhaps we might say that a modernist is someone who profoundly distrusts the authority of antiquity and tradition.  A modernist has a pride in his own abilities of reason and often seeks to create a new synthesis of theological thought independent of tradition and based on his own “new” ideas (his ideas are not new; they are often quite old errors.  But I digress).  So modernism has been described as not just one heresy, but many heresies grouped within one system of thought.

But the influence of this modernism isn’t just a one-way street.  The Protestant Bishop Spong actually reads and admires the “arguably Catholic” theologian Hans Kung.  We say “arguably Catholic” because while the Swiss priest Kung has authored some 30 odd books and is a Catholic priest who has taught theology for years, Pope St. John Paul II stripped him of his license to teach as a Roman Catholic theologian.  Kung has been called the “arch-heretic” of his day, “the king of all modernists,” and “an anti-Catholic’s favorite Catholic.”

Naturally, the media declared Kung to be a courageous rebel and depicted him as a voice of reason.  Kung has encouraged open defiance of Rome for years, which the Vatican anticipates will almost certainly lead to schism.  At one point, in an open letter to the bishops of the world, Kung called for a revolution to unseat Pope Benedict XVI!  If priests or bishops disagree with Kung, he dismisses them as nothing but compliant yes men for the Vatican.  Kung even went so far as to compare the authoritative system of the Church to that of Nazi Germany and said that the Vatican was no different than the Kremlin.  Really?  Nazis and Communists killed millions and millions of people and forced their modern ideas upon people in an effort to drive notions of God and morality from their people, but somehow Kung puts the Vatican in the same camp!

Interestingly, Kung and Pope Emeritus Benedict XVI had known each other at Tubingen University.  They also worked together as young priests at the Second Vatican Council.  Years later, they stood for radically different interpretations of that seminal event.  Kung saw it as a revolutionary rupture from the past, whereas Pope Emeritus Benedict (who remained close to the tradition of his native Bavaria) saw it as within a continuity of tradition.

But Kung’s influence remains broad.  He moves in the circles of the rich and famous.  He has met with Henry Kissinger and Desmond Tutu.  John Kennedy invited Kung to the White House and Kung also personally knew and advised Tony Blair (however, Kung declared the ex-prime minister’s eventual conversion to Catholicism a “mistake”).  One of Kung’s former students and assistants is Cardinal Walter Kasper.

One of the problems with the systemic nature of modernism is that once you start questioning the validity of the fundamentals, everything seems to go into flux.  You step out onto the proverbial slippery slope.  Philosophy and theology are systems.  Almost no one in the media gets this.  They see change as just change because they have no systematic thought themselves.  This makes it difficult to enter into conversation with modernists who start with a seemingly reasonable question, but in reality are ultimately deconstructing everything.  And Modernists are proud.  They imagine that their generation is somehow smarter than all the generations that came before.  But the reaction to modernism can be just as problematic.  Because a more traditionally minded person realizes how everything is a part of the whole, he may come off as rigid on a small point because he sees the bigger picture and suspects (often rightly) where the modernist is headed. Sometimes he too can become proud.  Certainly this dynamic is at play our times.

How then might we move forward?  It is doubtful we’ll make progress by pretending all is well and there is nothing to see here.  Perhaps the best place to start is with ourselves.  What if Jesus were to come in our own times?  Where would I stand?  Would I have the grace to see Him and hear His message?  Would I have the grace of Faith?  Or would I doubt His power?  Would I insist He couldn’t really die for me?  Would I insist that He never rose from the dead?  What is the Lord thinking of me right now?  Does He see me as prideful and rigid in either my modernism or my fundamentalism?  Can I think outside of these boxes that so many in the Church insist on trying to categorize people?  In all of this, we are reminded of a thought by a certain French Jesuit who once said that the truth is neither on the left nor on the right, but rather above them both.