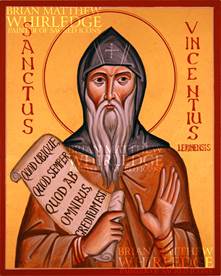 Off the coast of the French Riviera are the islands of Lérins.  It was in a monastery on one of those islands that Saint Patrick went to study in the fifth century, where there also lived a famous monk by the name of Saint Vincent of Lérins.  Saint Vincent was respected around the Catholic world as a learned and holy man, and he lived in interesting times when heretical teachings were prevalent in the Church.  Some priests and bishops were heretics, others were not.  His disciples asked Saint Vincent how were they to know which prelates were teaching the Truth and which were not.  Vincent’s answer is sometimes called the Vincentian Canon.  Vincent argued against what he saw as novel ideas that stood outside of Tradition.  So he proposed as his litmus test this Canon, arguing that Catholic Truth could be discernable by seeking what all Catholics have at all times and everywhere believed to be Catholic teaching.  Rendered in Latin, his Canon is, “Quod ubique, quod semper, quod ad omnibus, creditum est.”

It is not a perfect argument, but it has its value whenever we are presented with novel ideas.  Vincent’s Canon prompted his students to look to authority.  They knew that the Bible warned them in 2 John 1:9 not to become so progressive that they left the teachings of Christ and left God’s grace.  So Vincent bade them to first look to the words of our Lord on the subject.  What did the Lord teach?  Then they should ask what, if anything, did the Apostles say about the matter?  Essentially, by whose authority could the priests and bishops demonstrate their teaching?

For example, where might the bishops find their teaching in scripture or in the writings of the Fathers of the Church?  How did their teaching square within the Catechism they all learned as children?  Were there precedents in Canon Law upon which to base their claim?  In attempting to gage the orthodoxy of the matter, could the pedagogy of the liturgy provide them with any wisdom or insight?  Might their proposed idea be demonstrated by Natural Law?  How would Catholic philosophers or apologists assess their claim?  And what had the saints of old said on the subject?  Certainly it would be reckless to neglect the authority of the saints who had gone before them.

Moreover, they should ask themselves what do the various sister Churches think on the matter?  Would the bishops in Africa and Asia and Europe agree?  Would the ancient Churches founded in apostolic times be unified on this idea one way or another?  Would the Church in Antioch and Alexandria and Rome have some unity of thought on this teaching?  Would the monks living in the deserts of Africa think this a prudent claim?  Were there particular laws or past synods in Gaul or Britain or Iberia that could indicate any consensus on the subject?

Essentially what Vincent of Lérins was asking them to measure was the “Sensus Fidei,” or the sense of the faithful.  Would their Catholic great-great-grandmothers recognize this or that teaching as Catholic?  And would the Catholics all around the world find the teaching in keeping with what they have always been taught?  If the answer was no, then they should consider walking back a bit.  They might just be too far out on a limb.  Vincent told his students to hold fast to that Faith that has been believed everywhere, always, and by all.  By so doing, Saint Vincent argued, they would more likely be walking in line with God.

Fourteen hundred years later, Blessed Cardinal Newman argued that St. Vincent’s Canon was a useful tool in judging what could not be squared with the Tradition.  We must look outside our small circles where we all affirm each other’s beliefs and look beyond our modern times to assess a thing to be Catholic (universal) or not.  Building on the Vincentian Canon, Newman proposed that we might even look back to find our idea in a seminal form.  As a two-thousand year old Church, we Catholics know that doctrine can develop with time, but always this is more like an acorn becoming an oak tree.  We can hold an acorn in our hand.  We can climb an oak tree.  They may seem vastly different, but they are really one and the same, albeit at different stages of development.  Thus maybe a doctrine isn’t full-blown obvious in the ancient Church, as it has unfolded over time, but still, we should be able to deduce it in a seminal form in the past.  There should be some precedent within the deposit of Faith, and certainly Vincent’s Canon can help us judge modern ideas with greater objectivity.

We live in confusing times, as did Vincent’s students, and we should follow the same advice that Vincent gave his students:  have the humility to reference the Church’s Tradition (what G. K. Chesterton would one day call the Democracy of the Dead) to help discern where the Truth lies.