A Life in Shambles 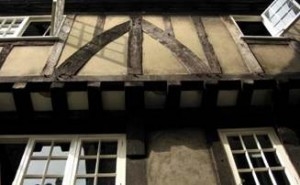 Our Magnificat stained glass windows include eight saints on the bottom registers who represent different vocations, epochs, and centers of the Church.  One of them is Saint Margaret Clitherow, who demonstrated an amazing amount of courage in her brief life and in her amazing witness to Christ.  Known as the Pearl of York, Margaret lived in the charming part of that city called the Shambles, and her storybook house still stands today.  In that little home, Margaret taught her children and others about the Catholic Faith, she hid priests in clever places called “priest holes” by the fireplaces and behind the walls, and she offered her home as a gathering place for the loyal Catholics in town who would illegally and clandestinely congregate for Mass whenever a priest would come through.

A little background is important to understand Margaret.  The ignominious King Henry VIII had torn English Catholics away from the universal Church in 1534, so consequently Margaret Middleton had been born a Protestant and married a Protestant (though her Protestant husband’s brother was a Catholic priest).  This was a time when many families were being ripped apart as the secular crown seized the sacred mantel of the Church and sought to impose their new idea of a national church (that had been heretofore unknown) on all in the realm.  It seemed with every new prince, the crown might switch back and forth between Catholic or Protestant, so most folks were just trying to survive.  By some counts, old King Henry VIII and Elizabeth I had crushed over 70,000 lives, so subjects understood that kings and queens could become rather zealous about this new church.  Nevertheless, some folks remained loyal to, or at least sympathetic towards, the old Catholic religion of their ancestors, knowing to do so meant they would be at odds with a dictatorial regime.

At the time, Catholic priests were considered traitors by the crown and were put to death in the most gruesome of ways, so Catholics who hid their now outlawed priests did so at grave peril.  The great Catholic monasteries and cathedrals had been closed or turned into Protestant churches and thus were off limits to Catholics, so consequently the Mass was celebrated in hiding, and often in private homes.  This was Margaret’s world, where she, at a young age, did a most extraordinary thing:  she converted to Catholicism when it was extremely dangerous to do so.

Many then (and even today) would like to dismiss Margaret as an obstinate, hysterical, unlettered woman misguided by a superstitious Roman Catholic Faith and manipulated by overzealous priests.  They see her zeal as embarrassing, in part because they themselves are so indifferent to faith, or are so compromised with the spirit of their age.  We should not fall into this same error, nor should we presume that just because Margaret was a Catholic woman that she was not bright.  To the contrary, let us assume quite the opposite:  St. Margaret Clitherow was a woman in charge of her wits and of her will, she had a courage that was uncharacteristic of her epoch, and she understood clearly her vocation as a Catholic.

Consequently in Protestant England, Margaret Clitherow was known as a “recusant” (one who refused to worship in the new Protestant church).  It was an open secret in York that Margaret was Catholic, but most folks ignored this and just looked the other way.  Anyone who has ever visited the tiny, crowded street (more alley than street really) of the Shambles in York, with its houses that hang over the street, will attest that, in such an extremely tight-knit neighborhood, having an illegal church in your house would be impossible to keep secret.  Margaret had been arrested for her Catholicism, and people would see her praying at the town execution site honoring the priests who had been martyred there.  Margaret’s husband was now and then called upon to pay the fines when his wife refused to go to Protestant services.  Margaret’s home was a safe harbor for persecuted and hunted priests, and it served as a small Catholic school.  Many of the priests to whom she gave sanctuary would go on to be martyred.  Because her son was Catholic, he could not be educated in universities in Britain, and it was also illegal for her to send him abroad to be educated, which the Clitherow’s did anyway.  (By the way, their son was eventually ordained a priest!)

So it is reasonable to assume that Margaret’s Faith irked some and shamed others.  After all, her stepfather was the mayor, and he was supposed to uphold the Protestant laws.  As such, perhaps the courage of this woman had become too conspicuous in light of the lack of courage of so many others, but for whatever reason, in 1585, the feckless Protestant authorities became emboldened enough to search Margaret’s house for priests.  As they burst into her home, the priest who was there barely escaped with his life.  But once inside, the authorities did find the chalices and the vestments, so they had caught Margaret with irrefutable evidence, and now they had to do something about her.  Keep in mind that harboring a priest was a capital offense in Elizabethan England, but you couldn’t try Margaret’s husband, who was, after all, Protestant.

Thereafter it seems that the Protestant authorities of York were planning on giving Margaret a show trial to use her as an example to the other Catholics in northern England.  They were likely planning on pressing other non-conforming Catholics onto the jury so as to force them to deny their own Faith and pronounce her guilt.  They imagined Margaret, being a woman, would easily recant, and they would not have to kill her, and all the Catholics would be put in their place.  But then Margaret did something else surprising.  Not wanting her blood to be on the consciences of the jurymen in a rigged show trial, and not wanting to implicate her family or expose her neighbors to danger, she just refused to enter a plea and therefore, could not be tried.  Now what?

Clearly, once the wheels were set into motion to publically out Margaret as a Catholic, things got quickly out of hand.  The embarrassed Protestants soon realized what a travesty of justice the whole thing was becoming and how their intolerant demands demonstrated the tyranny of the regime.  They wanted to chasten the Catholics and bend them into conformity, but now the brutality of the persecution of Catholics would be exposed if they had to execute a woman.  Thus did they try to talk Margaret into recanting.  She refused.  The mayor and others had not counted on the fortitude of his stepdaughter, so they sent in Protestant clergy to “reason” with her, but she would not bend.  Some began to insist that Margaret might very likely be pregnant, and that if she agreed that she might be pregnant, then they would not have to execute her.  But Margaret would neither confirm nor deny that she was pregnant.  Some pathetically spread false rumors to discredit Margaret, saying that she was sleeping with the Catholic priests, but no one believed them.  Finally, their more fanatical voices insisted that Margaret simply had to be tortured to death without a trial.  Before all of this, Margaret became all the more determined to profess her Catholic Faith publically.  Convinced of her eternal salvation and that she was dying for the True Faith, Margaret prepared herself for martyrdom.

How much like our Lord she was!  Like the Lord she had refused to defend herself, and then, in what was perhaps the greatest irony of all, it was Good Friday, March 25th, 1586, that Saint Margaret’s hands were bound as she was led out to the town’s bridge.  There she stood stripped as a public spectacle and was lain down with a rock placed behind the small of her back.  The door of her own house was put on top of her body.  Heavy stones were placed one by one atop the door in a steady process of crushing her to death, her spine snapping first.  The authorities hoped she would recant before her death, but she did not.  Her ribs were broken and began to burst forth from her skin.  She was dead within fifteen minutes.  Her body was left there for six hours.

When politics presumes to play with people’s consciences and forces itself into the sphere of religion, it does so by counting on the weakness of human nature and that their intimidation (under the veil of law) will work upon everyone, and that no one would dare stand up against them.  After all, most of us aren’t strong enough to resist the pressure of the state.  But then, sometimes a young woman shows us how.  Saint Margaret Clitherow was such a woman, and even Queen Elizabeth I, whose intolerant regime it was that had created the penal laws that had put Margaret to death in the first place, understood what a public embarrassment this execution had become, and supposedly wrote a letter to the people of York expressing her dismay.

St. Margaret Clitherow of York was a laywoman, a wife, a mother, and a businesswoman who shows us the importance of our Catholic Faith that we too often take for granted, and even to which we become indifferent.  We could stand to learn a lot from her. 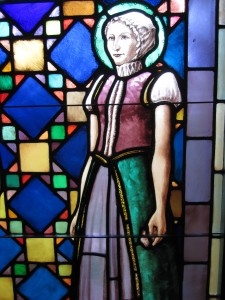