As Catholics, we need to remind our fellow Georgians that what is today Georgia was once a part of what the Spanish called la Florida.  Moreover, there are some great stories of heroic peoples from that forgotten century that we should all know.  And as Catholics, we need to be mindful of the Five Georgia Martyrs, whose cause is being promoted in Rome to move them, inch by inch, to be declared saints of the Universal Church.

In our parish here in Jasper, there is a retablo (or icon) of Saint Francis and the Five Georgia Martyrs, painted in 2014 and rendered in a Spanish colonial style.  The artist (a Floridian by the name of Mr. Dan Nichols) spent months of prayer and research, getting to know each friar, where they were from, the age they were at their deaths, and as many details about each that he could find, so he could capture something of the individuality of these five men.  He considered the look of Spanish men of our own day who are from the martyrs’ own regions to give him a reference point, sought information about sixteenth century Franciscan habits to make his drawings as accurate as possible, and found some item to associate with each Franciscan that would help distinguish them from each other. 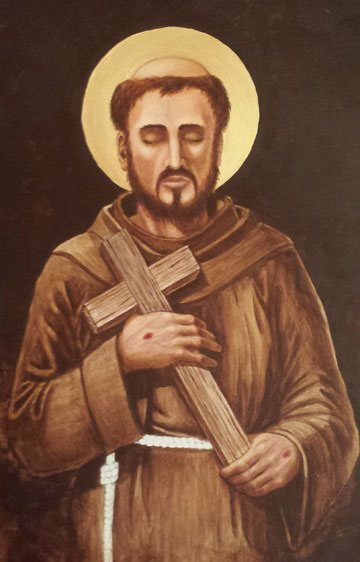 Our retablo depicts Saint Francis benevolently looking down upon the five Spanish Franciscan Friars who were martyred because of their proclamation of the Gospel, wherein they gave witness to the Church’s teaching upholding the Sacrament of Holy Matrimony.  These men were individuals whose blood was spilt to become seeds for the Church that now thrives in our state.  To know their story is to have a better understanding of just how heroic and selfless these founding Padres of the New World were.

We invite you to learn more about these men, their legacy, and their example to us in our own time as a Church who is called upon to uphold the Christian teaching on Marriage, and to spread the Gospel in this part of the world.  Please get to know Pedro de Corpa, Blas Rodríguez, Miguel de Añon, Antonio de Badajoz, and Francisco de Veráscola.  We know about them from another friar, Francisco de Avila, who survived to tell the story.  And especially on or around the anniversary of their martyrdoms (September 14, 16, and 17 in 1597), let us always be reminded and remember their witness to Christ.

Below you will see a link to the website promoting the cause of the Five Georgia Martyrs, a student handout that can be printed to give out in a classroom (in both English and Spanish), an Instructor’s Guide that we hope can help other instructors tell the great story of our Five Franciscan Martyrs of Georgia, and a photo tour of San Luis Rey Mission in Florida.  Lastly, we invite pilgrims to come to Our Lady of the Mountains Catholic Church in Jasper, Georgia, to see the retablo in person.