The Song of the Holy Rood

On Good Friday, 18 April 2014, at the close of Communion, the St. Gregory Choir of Our Lady of the Mountains Catholic Church in Jasper, Georgia, with soloist, Mr. Joseph McBrayer, and organist, Mr. Joseph D’Amico, under the direction of Mrs. Bridget Scott, performed for the first time ever The Song of Rood.  Our relic of the True Cross, which the congregation had just venerated, was enthroned upon the altar.  This recording documents that first performance.

The parish had commissioned this music from Mr. Dallas Gambrell with the text loosely based upon a portion of Saint Caedmon’s epic poem, The Dream of the Rood, one of the oldest, if not the oldest, Christian texts written in English.  St. Caedmon was a 7th / 8th century herdsman, lay brother, and poet, and is considered the Father of English Sacred Song.  The section we used for the anthem is that part of his longer poem that had been carved in runes on the Ruthwell Cross (or rood), a standing preaching cross, in what is today southwest Scotland.

When Anglo-Saxon monks from the holy island of Lindisfarne in Northumbria, and Irish monks from the holy island of Iona, went to Scotland to proclaim the Gospel, the first thing they would do was erect a preaching cross.  These crosses marked locations for gatherings when no church building yet stood.  In time, after the monks had enough converts, they would build a mission church, and the community would eventually become a parish.

These crosses might be plain, or (as in this case) might have images from the Bible carved into them to help the monks communicate the essential stories of salvation.  The Ruthwell Cross was erected during or just after the lifetime of Saint Caedmon.  It stands nearly 18 feet tall.  The cross was broken up and pushed down in dark days by proud men who called it idolatrous, but generations later, the parts that could be found were restored.  The Ruthwell Cross reminds us that Scotland was evangelized by Anglo-Saxon monks from the kingdom of Northumbria and was Catholic for nearly a thousand years.

As mentioned previously, The Dream of the Rood is one of the earliest Christian poems in Old English.  The oldest codex that contains the poem is in Vercelli, Italy and dates to the 10th century.  Characteristic of the Middle Ages, the author of the poem is anonymous, but tradition has long held it to have been Saint Caedmon.  The Venerable Bede tells us that Caedmon was the foremost Christian poet, and that his dreams led way to his verses.  Caedmon was a lay brother in the Abbey of Whitby and he drew the attention of the Abbess Saint Hilda, who saw to it that his dreamed verses were recorded.  With 156 verses, The Dream of the Rood is long.  Of those verses, only 26 are carved into the Ruthwell Cross (taken from the middle section of the poem) upon which our hymn is based.

Our text, a modern adaptation, takes some liberties with Caedmon’s text.  We augmented the text with some verses from the Vercelli Book to give this abridged poem more clarity.  The original Anglo-Saxon text would be hard for us to understand today, but one phrase in that original tongue remains in our anthem — “Krist waes on rodi,” which means “Christ was on the cross.”

There are two voices in the poem, the voice of the dreamer who narrates his vision, and the voice of the Holy Rood, who recalls the heroic struggle of the Crucifixion of the Lord.  We can almost think of this song as a dramatic play.  The chorus speaks for Caedmon and a soloist speaks the soliloquy of the Rood.

Chorus:
Hear now a vision long foretold
of greatest hero from of old.
Naked He embraced the rood;
He was stripped upon the wood.
So the blessed Cross did say
of Him who died for us that day.

Rood:
I stood firm, I dared not bend,
as I held there the King of Men.
I lifted Heaven’s Mighty Lord
as we were mocked by vicious words.
I was all black and wet with blood,
Like jewels poured forth upon the mud.
Yet I stood firm; I would not sway!
Hark unto me, turn not away!

Chorus:
Cold iron they drove through flesh and tree
to hold the Lord of Majesty.
The earth was torn, the veil was rent,
when heavenward His last breath was sent.
Darkest clouds wrapped round the world,
as Heaven’s glorious lights turned cold.

Rood:
I bore the Wielder’s pain and death,
and bracing felt His final breath.
Now came forth men abandoned, lost,
and saw what wage of sin had cost.
I knelt and freed the Lord from chains,
arms lifted Him from off my frame.
With heavy hearts they gave us rest
beneath the earth a stone cold nest.

Chorus:
Let all Creation sigh and weep
for the Lord of Life doth sleep.
Lamentations now let us sing
for Christ, our great and fallen King.
Yet, this is wondrous victory
for Him who died upon the tree.

While little more is known about Caedmon, we do know more about Saint Hilda the Abbess (d. 680).  She had been baptized by the hand of St. Paulinus the Roman around the year 627 together with her great-uncle Edwin, the first Christian King of Northumbria.  Northumbria’s kings called St. Aidan (d. 651) from his monastic isolation on the holy island of Iona to become the Apostle of the Northumbrian people and the first bishop of the new holy island of Lindisfarne.  It was St. Aidan who directed Saint Hilda to found her monastery in Whitby where a great library was acquired, and it was to this abbey that the young Caedmon had been drawn.  It was undoubtedly disciples of St. Aidan who would have erected the stone cross in Ruthwell (some 15 years after the saint’s death) and who would have preached the Gospel there, so near the Irish Sea.  Clearly, Caedmon’s poem became an essential and even monumental part of the proclamation of the Gospel in the Kingdom of Northumbria.

And thus, Caedmon’s beautiful vision lives again!  Click on the speaker to hear the recording of our choir’s debut of this powerful new anthem! 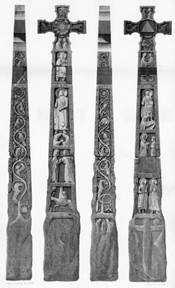