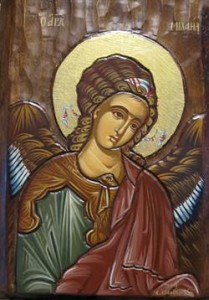 This prayer was once mandatory as a part of low Masses, and many faithful still pray it daily.  The prayer itself is not of great antiquity, as it is an abbreviated version of a prayer ascribed to Pope Leo XIII who died in 1903 at the age of 93.  One day, after celebrating Mass, the elderly pontiff had a vision which caused him to fall unconscious before his cardinals.  When he awakened, he reported having seen a terrible vision of evil spirits released from Hell in a new assault upon the Church.  In the vision, Pope Leo XIII saw St. Michael as the defender of the Church, ultimately casting those spirits back into Hell.  As a result of his vision, the pope wrote this prayer to St. Michael, asking him to defend us against the tyranny of Satan and the darkness of our times.

Whatever vision Pope Leo XIII saw that day is hard to say, but the twentieth century that followed was nothing if not a grave battle against evil ideologies that were absolutely inimical to the Church and the Gospel.  The twentieth century was a struggle for existence for the Church in many parts of the world, and at first glance, the twenty-first century looks no better, if not worse.  Given the darkness of our age, the Prayer to St. Michael reminds the Church Militant that ours is not a struggle so much against the nations of this world, but with the Prince of this World and his minions.

During this penitential season, our parish will begin to teach this prayer to those faithful who may not come to daily Mass.  If we understand the spiritual life of a Christian, we understand that ours is a struggle against not only our personal and collective sins, but also against the devil who most certainly does seek the ruin of our souls.  So, on Sundays during Lent, we will begin learning a chanted version of this prayer, and using it as our closing hymn.  You will find the musical transcription of the prayer in our St. Michael Hymnal inside the front cover.  We are including a PDF version below, as well as a recording of the chant so that you may learn it at home, if you wish.

St. Michael the Archangel, pray for us!

Recording of St. Michael Prayer below: