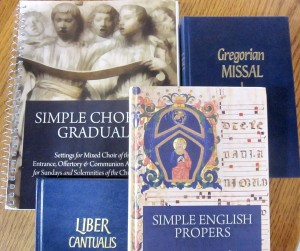 Why is the music at Our Lady of the Mountains so different from the last parish I attended?  It might be your experience that the music at O.L.M. is different from other parishes around the country or perhaps not.   We can say without a doubt that there is little to no consistency between parishes when it comes to music.  One might visit a parish one Sunday where Gregorian chant and traditional hymns are sung, and the organ is the instrument of choice.  Another Sunday in a different parish  one might hear the sounds of guitar and drums with praise songs in place of hymns.  Certainly the contrast in styles can be stark, and one might say, disconcerting, for many of the faithful.

So, does the Church encourage each parish to find its own unique style of music?  No, not at all.  The Church has very specific guidelines and rules for music at Mass.  While there are some options available to the knowledgeable music director, in general, Holy Mother Church has stated specifically what kind of music is best suited to worship.  She has in no way thrown open the doors of the church to the musical whims of any individual or group, although it may seem that way in some instances.

So, what kind of music are we talking about here?  What music is best suited to worship? Unequivocally, the Church makes it clear that Gregorian Chant should have “pride of place” in the Liturgy.  The Church also highly esteems Sacred Polyphony as having a unique character suited to worship and commends the Pipe Organ as the instrument of choice.

Isn’t this kind of music old and outdated?  Isn’t it out of touch with today’s society?  Well, certainly some of it is very old, but so is Sacred Scripture!  No faithful Catholic would argue that the Bible is no longer relevant in today’s society and discard it for a more modern text.  The antiquity of the Church’s musical tradition ensures us of a continuity of thought, of prayer, and of belief.  Our Sacred Language, Latin, does the same.  It preserves for us the one, true faith and safeguards it for all generations.

Does this mean that all the music we hear at Mass should be old and in Latin? Absolutely not!  The Church holds up Gregorian Chant and Sacred Polyphony as the ideal, but she encourages new compositions in keeping with these traditions.

But chant is so slow and boring . . .  No, chant isn’t, but maybe the people singing it are!  Chant is like giving wings to words.  It is prayer as incense wafting heavenward with no earthbound attachment to rhythm or meter.  Chant is the best way to deliver a message.  Don’t believe me?  Go to any sporting event and you will hear chants aplenty being delivered by fans of opposing teams.  Here at O.L.M. there may be fans of the Atlanta Braves baseball team who can chant and do the tomahawk chop at the same time.   When there is a message as important as the words of Sacred Scripture, chanting it calls attention to it.  It declares with a melody “these words are important!”  Chant moves us out of the domain of the secular and into the realm of the divine.

Does it have to be in Latin?  I don’t  understand Latin, and I don’t like what I don’t understand.  Most of us feel similarly toward anything we don’t understand, but Latin serves a higher purpose.  As stated earlier, it preserves Truth because the Latin language is a Sacred Language and not a spoken language.  This means it’s not going to change over time.  I’m sure we can all think of words in English that have come to mean something entirely different within our own lifetimes.   Ever heard the phrase “lost in translation”?  Well, that’s what happens when something that is firmly fixed in one language, can’t completely be expressed in another language.  One example of this is reading the psalms in Hebrew as opposed to reading them in English.  There is poetry and word-play in the Hebrew that is simply lost in an English translation.    It is easy to conclude that the original language give the “fullest expression” of the text, and therefore is unique and special.  Still, this does not preclude us from chanting in our native tongue.  Certainly, as we have seen with the most recent translation of the Roman missal, when done carefully, a text can be beautifully rendered in English.  So chanting the Mass parts in English is one way to demonstrate obedience and show our respect for the beauty and truth inherent in these rich texts.

Okay, but why does it seem like we sing everything?  At my last parish Father didn’t sing at all.  Does Fr. Byrd just like to hear himself sing?  I can be fairly certain that Fr. Byrd doesn’t do all that singing just so he can hear himself.  Singing takes a lot of energy and can be quite tiring, so Fr. Byrd must be motivated by something other than the sound of his own voice!  The first intention of any priest offering Mass should be to do so reverently and validly in accord with the norms of the church.  Believe it or not, the Mass is meant to be sung.  The norms expressly call for it.  Have you ever wondered why the altar missal is so huge?  It’s full of music!   Fr. Byrd is singing the Mass because he is being obedient, not because he fancies himself the next Pavarotti.

But can’t we have at least one Low Mass at O.L.M.? Here is something that comes as a bit of surprise to many folks:  In the Ordinary Form of the Mass, there is no such thing.  Let me explain.  In the 1960’s the Church decided to put together a new missal. This Missal, called the Pauline Missal, has been used ever since.  Most recently, the 3rd edition of this missal was published with significant changes in text brought about by a more careful translation of the original Latin.  The Pauline Mass, or Ordinary Form, as it is now properly called, does not have a distinction between High and Low Mass like the more traditional Extraordinary Form does.  The Mass is just one form with options that can make it more solemn as for a Sunday Mass, or less solemn, as for a daily Mass.  Again, the rubrics for the Sunday celebration of the Mass specifically call for a heightened degree of solemnity so as to set this day apart from the rest of the week.  If one is looking for a Low Mass, one can visit St. Francis de Sales Parish in Mableton, GA, where the Extraordinary Form of the Mass is offered daily.

Where can I read about these norms and rubrics you keep talking about?  You can start by reading The General Instruction of the Roman Missal (GIRM) either in book form or online here:  http://www.usccb.org/prayer-and-worship/the-mass/general-instruction-of-the-roman-missal/

So, what does this GIRM have to say about music?  Lots!  It tells the musicians what should be sung and when to sing it.  For example, it specifically says that Mass is to begin with the chanting (or singing) of the Entrance Antiphon.  It tells us where that text should come from and how and by whom it should be sung.   There is no room for church musicians just to do as they please, although sadly, many do just that.

The Entrance Antiphon?  You mean we don’t start Mass with a gathering song?  Well, in a sense, the Entrance Antiphon is a kind of gathering song, because it unites all who are present as a praying body.  But this “gathering song” has a specific text that is proper to the day, and therefore, Catholics all around the world can hear and pray the same (or very similar) words of Scripture at the same time.  If you are thinking of the gathering song that is frequently called “The Opening Hymn”, well, that’s not called for in the General Instruction.  A random hymn chosen by a particular music director is just that, a random hymn.  A crucial part of the Church’s liturgy is lost when a congregation is denied the opportunity to participate more fully by chanting the proper texts of the Mass.

But I have spent the last forty years of my life singing four hymns at every Mass, and now you’re tying to tell me that’s not the way it should be?  Bah humbug.   Many Catholics have spent most of their lives singing four hymns at every Mass, so I know what you mean.  How the “Four-Hymn Sandwich” came into existence is a discussion that would take several more pages of type, and still, we wouldn’t have the answer to the question.  Suffice it to say that confusion led to more confusion (and probably a whole lot of disobedience) and in the end, picking four hymns or songs that pleased the musicians and some of the folks in the pews was just the easiest route to take.  The Four-Hymn Sandwich became the norm and soon, nobody knew differently.  Not even those in charge of the liturgy and music knew differently.  In many cases, sadly, not even the priest knew differently.  But it was never intended that the Mass would be handled so carelessly, and slowly but surely over time, these aberrations have come to light and are being addressed by faithful priests, music directors, and laity alike.  The 3rd Edition of the Roman Missal is one example of this.  Organizations like Church Music Association of America (website here:  http://musicasacra.com/) are doing valuable work in educating musicians and providing much-needed resources for free.  Our seminaries, too, are showing encouraging signs that the Liturgy will no longer be neglected.   Chant is being heard in more and more parishes across the United States, and indeed, at Our Lady of the Mountains, an obedient and more faithful (and I would add more fruitful) worship is being offered in the Holy Sacrifice of the Mass.