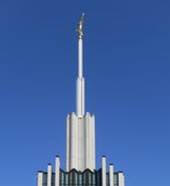 Mormons can be attractive people who typically have large families.  They produce beautiful television ads and moving Christmas albums.  Still, Catholics need to look past these initial impressions if we really want to understand them.  First, let’s not be naïve, because while that family next door may be wholesome, we should not assume that is always the case, as suicide and divorce rates are actually higher in Utah than average.  Yet, it is important for us to understand their beliefs.  Where do they come from?

Well, Mormonism is American-made, and it emerged from Protestantism in the 19th century.  Mormons call themselves Christians, but they do not hold the same fundamental beliefs that Christians do (they don’t believe in the Trinity or the Virgin birth, they believe God the Father has a physical body, and there are many more differences in belief).  Note that the Catholic Church does not recognize Mormon baptism (though we do recognize the baptism of Protestant churches).  So then why are Mormons different?  Simply stated, Mormon beliefs are quite extraordinary.

These beliefs are found within the Book of Mormon, which is a blend of Protestant prejudices in quasi-King James English that borrows names and passages from the Old Testament and otherwise relays to us a most fantastic tale.  This book was produced by the founder of the Mormons, Joseph Smith.  He claimed to have found buried in New York thin, 6 x 8 inch golden plates written in some form of Reformed Egyptian.  Smith claimed that these plates were seen by him and then were taken by the angel Moroni, but he later was able to interpret these now missing plates by looking into a hat and dictating the book by the use of a special interpreter or peep stone.  I am not making this up.

The extraordinary tale he then dictated begins after the Tower of Babel, when some of the lost tribes of Israel are supposed to have come across the Atlantic to the American continent.  This Hebrew civilization in the Americas was supposed to have lasted over a thousand years.  According to the Book of Mormon, these people in the New World raised oxen, cows, horses, sheep, and wheat, rode in chariots, wrote documents, and used compasses (though no fossil or archaeological evidence of these things in pre-Columbian America have ever been found).  Joseph Smith also claimed that after Jesus’ ascension into heaven, he came back down from heaven to the New World to establish a church in the Americas.  But then some three centuries after he established it, there was supposed to have been a cataclysmic war in what is today New York, and the descendants of those survivors are now (says the Book of Mormon) our Native Americans.  The Book of Mormon tells us that these peoples were given dark skin as a sign of having been cursed by God.

But the Book of Mormon isn’t all that distinguishes the Mormons’ teachings.  For example their Bible, is here and there slightly different from our Bible.  Mormons add certain verses to their Bible because they claim that the most abominable of all the churches (the Catholic Church) at some point removed these verses long ago.  Never mind that these were Hebrew Scriptures, nor are we to ask how the Book of Mormon could have known about the so-called “abominable” Catholic Church if it was written in pre-Columbian America.  Certainly there is no textual evidence of these verses in the old world documents.  Later Joseph Smith is supposed to have translated some Egyptian papyri in his Book of Abraham (which Egyptologists reject as pure nonsense).  That book evidently talks about a planet Kolob.  All of this is to say that the Mormon worldview is, to put it mildly, decidedly different from that of mainstream Christians and historians.

But there are other reasons our Church won’t accept a Mormon Baptism.  For example, Mormons aren’t really Trinitarian.  Joseph Smith taught that God the Father was once a human being living on the earth, and that the Father, Son, and Holy Ghost are three separate divine beings.  And their understanding of heaven is peculiar, too.  There are three heavens in Mormonism.  The top heaven is shared by Mormon men who go on to become gods or rulers of their own universe.  Their earthly family life is important because Mormons believe the larger the family, the better able they will be to achieve that highest heaven.  Joseph Smith infamously promoted polygamy as a necessity for obtaining godhood (and he himself married a teenager as his second wife, and had in total some 33 wives over the course of his life).  That teaching was later disavowed by most Mormons, but there are other major differences.  If you want to learn more and read a book on the subject, consider reading When Mormons Call by Isaiah Bennett.

It is easy to point to odd teachings, but how might we Catholics better go about explaining our Faith to our Mormon neighbors in a way that does not start in ridicule?  That is the better question, right?  First of all, Mormonism is growing, and not just in America, so something about it attracts people.  Their emphasis on the family is key here.  So we could begin with a compliment, affirming what we see in some of them as kindness, faithfulness, and dedication to family.  Those things are certainly admirable qualities that are in line with Catholic teaching and tradition.  Next, we might ask them about their ancestry or heritage.  Chances are many have European roots, and so we can talk about our shared Catholic heritage (where there is plenty of evidence of the existence of the Catholic Church that was really founded by Jesus Christ).  Some of the music they sing was written by Catholic saints in Europe.  Perhaps we can start with common denominators to try to draw them out of error.

Those Mormons out there looking into Catholicism should know that while it takes a couple of weeks to become a Mormon, we Catholics want people to take their time in prayer, study, and discernment.  It would be terrible for someone to become Catholic and then leave the Church, so everyone needs to understand clearly just what a commitment this is.  Our baptismal promises are very serious.  Moreover, you’ll need a Catholic Bible and a Catholic Catechism.  Reading the Catechism might be a best place to start really.  There are some serious philosophical hurdles you’ll need to overcome in order to see the world through Catholic lenses, like the Mormon belief that God is a physical being who became God through some developmental process, so certainly you’ll want to read through the section on the Holy Trinity.

That said, as Catholics, we could also learn from the Mormons (they call themselves Latter Day Saints).  Their use of well-produced music and media to spread their message (no matter how confused that message may be) is clearly touching people on some level.  As a Church, why aren’t we ourselves doing a better job of evangelizing?  Why can’t we reach out to our neighbors and talk about our love of Christ?  Where are our great television ads?  Where are all the programs we have to strengthen the family?  What are our bishops doing to support families and marriage today?  And why aren’t our Catholics in the pews living up to our Church’s timeless teachings that are so pro-life and pro-family?  Why aren’t we, as Catholics, doing a better job making our parishes the center of our lives from childhood to adulthood?  If the Mormons look attractive on some level, why can’t we work hard to learn from the things they do well?