Why We Think that Way 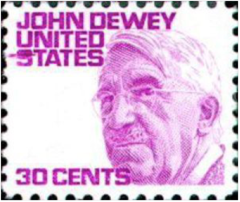 Sometimes you hear Americans say that they are “religious,” but have rejected organized religion and don’t need some church to pray.  These folks are often unwittingly disciples of John Dewey, the father and founder of our progressive, modern education system.  While most Americans today have probably never heard of John Dewey, in his day, he was considered our nation’s foremost philosopher.  His life spanned from the American Civil War to the Second World War.  His work has been translated into many languages and he has affected the pedagogy (or teaching philosophy) of many countries all around the world.  But in this country, his influence in education is unequaled.  He essentially defined our American public education system.

Dewey was an educator who concerned himself with pedagogy so that he might otherwise advance his own philosophical principles.  Dewey was an atheist.  He rejected metaphysics or anything supernatural.  He was a naturalist or materialist.  Dewey believed that no deity really exists, but is rather a construct or a projection of our collective imagination whereupon we seek to establish and justify our values in some higher realm.  Dewey’s ‘god’ is the imaginary cloud wherein we enshrine our best human ideals.  This ‘god’ was a subjective creation of society, a constructed ideal, and maybe even a culturally necessary ideal, but in no way an objective reality.  In this sense, he could talk about a ‘god’ in the public forum and see himself as ‘religious’ in a certain way.

But Dewey rejected organized religion.  In 1933, he helped co-author and then signed the Humanist Manifesto, wherein he promoted some ‘spiritual’ synthesis of world religions into a vague, new religiosity, or common faith.  But again, this is not based on anything supernatural or metaphysical.  Dewey rejected all revelation of a hidden or transcendent God, insisting that no such reality exists to be revealed, and thus these revelations are erroneous.  For him there was no otherworldliness.  Consequently, any religious dogma or doctrine was anathema to Dewey.  He saw his goal of education to help rid the world of these notions, and to form a more unified, secular future.  Dewey believed that man had no soul, and that there were no objective truths.  Moreover, he insisted that man was evolving through a progress of material scientific advancements, and therefore, morality was also evolving.  Dewey insisted there are no fixed and permanent moral absolutes.  What was morally ‘true’ in the past would not necessarily be morally ‘true’ now or in his utopian future.  Dewey wanted a ‘scientifically’ based morality (and this included Psychology).

Dewey (who held no moral absolutes) nevertheless promoted democracy with the zeal of a missionary.  But Dewey also had socialist tendencies wherein he longed to bring about a social unity that would be the ideal of democracy (in his view).  He promoted hands-on learning and experiential education, but had much to say on curriculum to control what was learned.  He seemed to want to promote the individual on one hand, but people who thought too much for themselves were problematic, in his estimation.  These folks spoiled the social harmony for which he was striving.  Dewey saw education as essential in creating social change and finding a shared social consciousness, but saw individualism as something like insanity.  Again, he argued there was no salvation of the personal soul, and no one could claim to be individually beholding to God!  No one religion gets to define us.  We have to be together!  And so he saw pious, conservative, or traditional thinkers as dangerous to a democratic society.

So Dewey rejected religion as zealously as did Lenin or Marx.  He rejected any dependency upon grace or any Divine intervention because he insisted there was no real God, and humanity must have faith in itself and in its sciences.  Dewey saw religion as holding back man’s potential and development.  In his estimation, about the only value in Christianity were its teachings on social justice.  So he sought to dissolve all ‘creeds and cults’ (as he called them).

Doctor Dewey was a pragmatist.  He looked ahead to some imagined future, but not behind him.  He dismissed ancient philosophy as all but irrelevant.  He rejected traditional religion.  He rejected Western Civilization as merely episodic and provincial.  He rejected classical ways of educating children in general, insisting it would not help them prepare for the future.  His beliefs have permeated our public schools and universities (even some Catholic schools and universities!) for nearly a century.  This is why our society thinks the way it does.