Who is Your God? 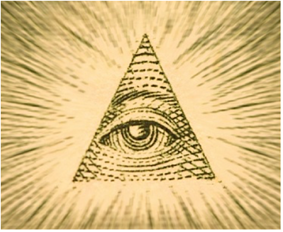 Sometimes, when we hear American politicians invoke “God,” we might pause and wonder about their theology and just who is their God?  Catholics begin and end our prayers by invoking the Holy Trinity, but publically, our nation speaks more broadly about the divine.  In part, this is to include Jews and to be (as much as possible) nonsectarian within our religiously diverse nation.  This public form of religion is a kind of deism that was born, in part, during the Enlightenment (like our country).  Many so-called Enlightenment thinkers were unwilling to deny the necessity of a prime being and first mover, but they were also deeply suspicious of any revealed religion, especially Catholicism.

This deism is embodied in the Craft of Freemasonry.  Masons speak of their deity as the Grand Architect of the Universe.  Certainly America has had lots of Freemasons in our government from the get go.  For example, Hugo Black was a Freemason (as well as a member of the KKK).  Hugo Black was the longest serving Justice of our Supreme Court.  He was a lapsed Baptist who sustained a vehement animus against Catholicism.  But Hugo Black did believe in the Constitution, and he and his liberal court were the ones who killed school prayer and gave us the notion that there should be some great wall between Church and state.  All these decisions were in opposition to Catholic education in particular.

Freemasons are fuzzy about the generic deity of their temples.  For example, in the upper ranks, Freemasons can become Shriners, who wear a Moroccan hat called a fez that has on it a Muslim crescent and an Ottoman sword.  We’re told that they swear their oaths on a Koran and take their oaths in the names of Allah and Mohammad.  One doubts too many Muslims would be impressed with these oaths, but clearly, there is such a syncretism here, where one religion is just as good as the next and doctrine matters little.

While we can’t define a national religion, we can say that if we could define one, it would definitely not be Catholicism (even though there are more Catholics in the U.S. than there are folks of any other religion).  So when we pray nationally, are we praying to the God revealed by Jesus Christ and worshiped daily in the Roman Catholic Church, or to some other deity?  Who were the Presidents Roosevelt (both Shriners) invoking when they invoked the Almighty?

Historically, Presidents rarely go to church on Sundays.  Maybe this is for security reasons, or to avoid scrutiny, or to avoid appearing to promote one denomination over another.  Perhaps it is because they don’t want a pastor preaching to them about policy.  Whatever the reason, we can ask ourselves if it matters that our Protestant presidents are un-churched.  Or more importantly, does it matter that we, as Americans, seem complicit at times in this honoring some generic, secular god now and then invoked in political discourse?  Our National motto is “In God We Trust,” but just who is this deity?

The question goes back to the beginning of our nation.  Just consider that early on in the history of the English colonies that were to become some of our first states, there was a remarkable theological development whereupon many of the great grandchildren of the Puritans ceased believing in the Trinity and embraced Unitarianism instead.  Harvard College (founded in 1636) had become so liberal by 1701 that Harvard graduates who still believed in the Trinity went on to found Yale College as an alternative school.  By 1800, Harvard was Unitarian.  They had rejected the divinity of Christ and the traditional belief in the Trinity.

Calvin liberated his brand of Protestants from the papacy, but that same suspicion of authority was soon applied to Calvin himself.  So if Calvinists had thought man was wretched and sinful, these new Unitarians argued that man is basically good and could become morally perfect in a utopian society with a good secular education.  Sound familiar?  Calvinism had been exclusive and their vision of God could be an angry one.  Calvinism taught that human beings were unable to work towards their salvation and many would be damned.  Unitarianism, on the other hand, saw itself as more inclusive.  Their vision was of a vague and removed divinity, and that man could find perfection here and now.

Stop and consider that in 1751, John Adams entered Harvard.  He graduated in 1755.  He and his wife Abigail were Unitarian as was their parish in Quincy.  John Adams was one of the principle architects of the Declaration of Independence and under the Constitution he became our nation’s first vice president and our second president.  We should note that Thomas Jefferson also identified himself as Unitarian, and Washington was a Freemason and deist besides.  Now, even though John Adams had embraced Unitarian thought and rejected creeds as merely manmade, he nevertheless considered himself devout.  He would have also seen himself as a follower of Christ (albeit, we could argue, an Arian one).  He even famously warned that the American government could only persevere if its citizens remained religious.  Sorry, John, but this past year about 65% of Harvard’s incoming freshmen class declared themselves agnostics or atheists.

Unitarianism is essentially a new Arianism (an old heresy Catholics fought for centuries) that has reemerged into world thought.  Jesus may be swell and all, but he is (according to Unitarians and deists like Washington, Adams, and Jefferson), not really God!  Still, it is ironic that one of the seedbeds of the secular humanism of America and its vague notion about some convenient ‘god’ we now and then evoke emerged out of the devolution of Puritanism.

This prevailing liberal philosophy is entrenched in our nation’s history.  The lesson for us, as Catholics, is that we very much need a Creed, a Catechism, and the Magisterium.  Moreover, our world very much needs Catholicism.  Our Catholic Faith teaches us that man is free, but fallen; good, but sinful; loved, but not always lovable; chosen, but in need of redemption and very much in need of a Savior.  So maybe the Mormons and the Unitarians have a different idea about God, but as Catholics we need to remind ourselves that our God is the Triune God revealed in Jesus Christ, and made known in the Sacraments, and if we can teach the world that, it would be a better world, by far.