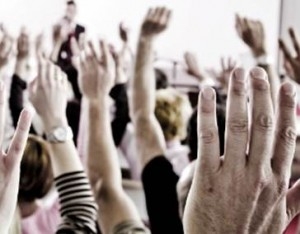 Named for the feast of the Holy Spirit called Pentecost (ironically, a feast which they do not observe), Pentecostalism became a movement that emerged out of evangelical Protestantism and that emphasized even more of a direct personal experience of God through what they call the baptism of the Spirit.  Once someone has accepted Jesus Christ as their personal Lord and Savior (like other evangelicals), Pentecostals believe that there is a further conversion and empowerment that allows them to live a Spirit-filled life.  Implied with this is that water baptism is not enough, there must also be a baptism in the Holy Spirit.

Separated as they are from the traditions of the Church and the continuum of our ancient Catholic teachings, they look to scripture to find direction.  But without the benefit of the Magisterium, their conclusions seem strange to us Catholics.  For us, baptism is a Sacrament, whereas for many Pentecostals, “water baptism” is more symbolic of the grace that has already occurred in a person who has accepted Jesus Christ as his Lord and Savior.  The Catholic awaits the gifts of the Spirit conferred in the Sacrament of Confirmation, but the Pentecostal expects a “baptism with the Spirit,” which they insist is an empowering experience (not a sacrament).  We have the Sacrament of the Anointing of the Sick, whereas Pentecostals, who do not believe in the ordained priesthood, do believe in faith healing and miracles by their preachers or through their congregations.  By calling themselves “apostolic,” Pentecostals claim that they are living as the apostles did in the apostolic age when the Spirit was moving powerfully through the early Church.  Just as the Apostles were empowered to heal, the Pentecostals will turn to faith healing within their own revivals.  Just as the apostles spoke in tongues after Pentecost (meaning they spoke in different recognizable languages), some of the Pentecostals will occasionally do something they call ‘speaking in tongues,’ too, which they claim to be angelic language, even though these are unintelligible utterances, not recognizable languages.  Another Pentecostal might claim to be the interpreter of these unintelligible utterances, and other Pentecostals might receive his interpretation as prophecy.

Pentecostal worship is spontaneous, characterized by intense emotion and prayer.  It can include “dancing in the Spirit” or “running the aisles.”  The faithful shout out in jubilation, jump up and down and weep.  In the past, they were sometimes called “holy rollers,” because they often fell down upon the ground in their worship as they are “slain in the Spirit.”  But now in places, their worship has become more mainstream and less theatrical.  When that happens, their worship is more contemporary in nature (but there is obviously no formal ritual as Catholics would understand it).  Like the Baptists, they see their Holy Communion as an ordinance and they do not use wine, but grape juice.

This new ‘non-denominational’ movement ultimately spawned more than 700 other denominations!.  Clearly then, we can only speak generally about Pentecostalism, as it has many branches of thought.  For example, some Pentecostals are Trinitarian, while others are not.  There are nearly 300 million Pentecostals worldwide.  Pentecostalism has preached what they call the “foursquare Gospel” which includes:  1) new birth and salvation, 2) baptism in the Spirit, 3) recognition of Jesus as the healer of the body, and 4) the new teaching on what they call the “rapture” combined with an emphasis on the imminent second coming of Jesus.  The Protestant teaching of “the rapture” emerges lately here in America (and to some extent in Britain), and it is the idea that Christians will be physically taken up into heaven at the end of times (a teaching that is not in the least Catholic).

With no sense of formal liturgy, the religious experience is very important to Pentecostals.  They place credibility in the emotion of the experience that is part of their excited and, at times, even feverish worship.  In a sense, Pentecostalism recognizes what we all know:  that many times baptized Christians do not always live our lives accordingly, and that often times, we will have a definite experience of a reawakening of faith (which the Pentecostals want to claim or name as this Baptism of the Holy Spirit).  As Catholics, we accept that there will be times throughout our lives when we may have a deeper insight into prayer or when we might feel the closeness of the Lord more tangibly, and that this may lead us to be more fervent.  There is no doubt that the Holy Spirit has His hand in our own on-going conversions throughout life.  Nevertheless, the many spiritual doctors of our Catholic Church warn us not to put too much emphasis on these emotional consolations that come and go in the spiritual life.  It is impossible to expect these consolations in the Spirit all the time.  If we are only committed to our faith walk when we are being consoled with emotions (or “when we feel it”), then we won’t likely long persevere in our devotions and faith.  Moreover, we should not judge our spiritual state by the emotions we are feeling.  The spiritual life has times of aridity (or spiritual dryness) and this is typical of even the saints.