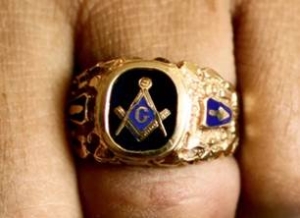 If you Google search the Catholic Encyclopedia for Freemasons, you will be amazed at how much material you find.  For our purposes, we thought a more abridged version (while still long) would help folks.

Catholic priests still get calls about the Freemasons, sometimes from Catholic businessmen who are facing the frustration of trying to successfully operate a business in small-town America without being a member of the Masons.  It can also be from a Catholic woman whose husband is being pressured to join the Masons.  Occasionally, Freemasons inquire about becoming Catholic.  In this case, the short answer is that Masons can become Catholics, but no Catholic should be a Mason.  So, for the Mason considering conversion, he must be willing to leave the Masons.

Why?  Well, it’s complicated.  Please keep in mind that most of the signers of our Declaration of Independence were Masons, that many of the older Protestant cemeteries in our country are filled with Masonic tombstones, and that the cornerstones of most of our national, state, and local governmental buildings have often been ceremoniously laid by Freemasons, so this secret society has been (and remains) very influential.

Many non-Catholics have Freemasons in their family, and there are many in our community.  Sometimes they are in our pews accompanying their Catholic wives to Mass.  Often times, these are upstanding citizens of our communities.  You would want to know and associate with most of these men, and probably do!  Still, the Freemasons have, over the course of their existence, often set themselves in conflict with the Catholic Church.  In some parts of the world, the Masons have coordinated brutal attacks on our Church, but in this country, the Freemasons have been more benign towards the Church.

One of the difficulties when speaking clearly about the Masonic history and Masonic influences in and on our modern world, of course, is precisely because theirs is a secret society.  The study of Freemasonry can thus become a maze of absurd foundation myths and fantastical conspiracy theories.  One is left to speculate.  James Anderson, the Scottish Protestant clergyman who wrote their Book of Constitutions, apparently claimed that Jesus had been a Mason, and that the Freemasons had built both Noah’s Ark and the Tower of Babel.  And if their “history” is fantastic, so is the hodgepodge of their rites, borrowed here and there from the Druids, the Cult of Mithras, and the ancient Egyptians (their pseudo-religion has an altar, vestments, feast days, and a hierarchy).

The other difficulty is Freemasonry is not always and everywhere the same.  In some places and at some points in time, Masons are or have been more radicalized, where in other times and places, they have been more harmless.  Anglo-Saxon Freemasonry, for example, tends to be somewhat Christian in its ritual, but Masonic lodges are windowless places, and this secrecy and the many differences among lodges make it difficult to speak conclusively about all Masons.

So, what is the real story?  Well, the Masons emerged out of Protestant England in the early 18th century.  As Protestant, the founders of the Freemasons were already suspicious of all things Catholic, so not surprisingly, this prejudice permeates Freemasonry.  Somewhat predictably, one of the traditional bogymen for Freemasons has been the Pope, and the papal tiara is seen by them to be a symbol of spiritual tyranny.  Subsequently, the papacy has set itself against the Freemasons (for this and other reasons).

English Protestantism tried hard to eliminate any vestige of Catholicism in their worship by removing any hint of liturgical ritual and mystery.  It is extremely ironic then that the Freemasons began to compensate for man’s innate need for sacred ritual by creating new esoteric rituals using mystical symbols and crafts to honor the divine architect.  As Masons can be non-Christians, their notion of the deity is somewhat vague and not very Christian.  Officially, they tend to see the divinity of Jesus as an optional belief, and stress that all brothers can achieve a place at the heavenly lodge by being good men.  Some lower level Freemasons may be less aware of the true nature of the Masons, but those more advanced in the hierarchy have a truer understanding of how radically incompatible Masonry is with the Christian faith.

Nevertheless, those early Masons tended to be highly moral men, and as a rule, they rejected atheism.  As they were made up of folks from different Protestant denominations, they kept religious differences at a distance, and created a nonsectarian forum to promote the unity of humanity (being Protestants, they had already rejected the original nonsectarian unity of the Catholic Church).  However, as time went on, Masons more and more began to imagine themselves as a continuum of ancient cults and as a worldwide brotherhood, so even Christian doctrine became optional or coincidental at best.

Some will argue that the Freemasons are all about power, with so many influential politicians and international financiers in their ranks.  They can certainly seem like a powerful force, albeit one somewhat beneath the surface of things.  Some Masons have sought supernatural power over the years, as there is a list of new-age occultists who got their start in Freemasonry.  But realize that when any of us seek secret powers, we often unknowingly become a pawn to those powers unseen.  So, not surprisingly, over the years the international Freemasons have supported, participated in, or even led strong attacks against the Papacy, the priesthood, and the Catholic Church (the French Revolution, the Kulturkamp, and Plutarco Elias Calles in Mexico are just some examples).  If you want to know more about some of these times, look up the Carmelite Martyrs of Compiegne, or St. Miguel Pro.

Since the inception of Masons in the early 18th century, our Church has officially spoken out over fifty times against them in various papal encyclicals and pronouncements, warning Catholics not to excommunicate themselves by taking the oaths and vows of the Mason’s esoteric rituals, or succumbing to their doctrinal indifference to religion (please note that the papacy is not condemning all Masons, but warning Catholics to avoid their errors).

Today, most Freemason lodges would welcome Catholic men.  While as Catholics, we should not become Masons, it is nice to know that the old anti-Catholic nature of Freemasonry has modified such that they are more open to Catholicism.  Unfortunately, despite the warnings of our Church, some Catholics have become Masons over the years (even, sadly, some priests).  What can we say?  We human beings are a proud lot.  But friends, if you’ve read this far, you can’t say you weren’t told the truth.

So how do we help our Masonic friends?  First of all, we need to keep in mind that these men (and in some places women) are our neighbors, and most are very good neighbors.  The noblest of their goals are generally ones that we can agree with as Catholics, because the noblest of their goals are our goals – to live a moral life, to build a just society, to overcome sectarian confusion, to unify humanity, and to honor and serve the truth.  These goals are original to our Church (not Freemasonry).  And while some Masons on occasion have been anti-Catholic, when that happens, even when it has been ruthless, it is a pride or a prejudice born out of ignorance.  I am guessing that our Lord would probably tell us to forgive them those occasions, to love our neighbors, and love them enough to model for them the noble nature of the real Catholic Church, which is really ancient, which really built the great cathedrals of Europe, which really built western society and culture, and for whom Jesus Christ and the Patriarchs of old are really very much fundamental.

As Catholics, we shouldn’t be naïve, nor can we deny the historical moments when we have suffered as a result of the ideas or the leaders of Freemasonry in this or that country.  But as Catholics, we can be confident, because our history is not a fantastical one, and our tradition is not a recent one, nor are our rites an esoteric invention.  As Catholics, we embody what the Freemasons are erroneously attempting to reclaim.  While misguided, their individual goals tend to be generally good.  But the Catholic Church is the real ancient institution that takes us back to the dawn of civilization.  So if tradition and virtue appeal to our Freemason neighbors, then maybe they can eventually find their way home to us – home to the Church of their ancestors.

Finally, we gain nothing by trying to characterize every Freemason as a Devil worshiper focused on establishing a new world order.  This hysterical caricature is as misguided as it is uncharitable.  The real problem with Freemasonry is its relativism towards Christianity.  If Jesus is divine (which our Church teaches) and if we need His grace to find salvation (which again our Church teaches), then we shouldn’t belong to an institution that essentially holds semi-Arian and semi-Pelagian, that is heretical, doctrine.  Jesus is God.  I cannot be saved without Him.  He calls all humanity into His Church.  And my Catholic Faith must be essential to whom I am as a man.  These truths I cannot deny for sake of fraternity.  Because of the love I bear my Mason friends and neighbors, I am compelled to be a steadfast witness in my Catholic Faith!