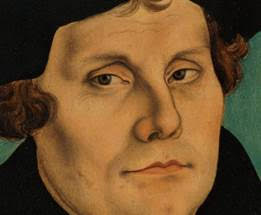 Lutherans are the oldest, and one of the largest, denominations of Protestants.  They are named for their founder, the ex-Catholic priest, Martin Luther.  While Luther would have preferred his movement to be called “evangelical,” the Roman Church called his followers “Lutherans” and the name stuck.  In Luther’s zeal to reform the Church, he perhaps inadvertently began an epic schism that continues five centuries later.  It was the first break in the unity among Western Christians.

As first generation Protestants, the Lutherans retain a liturgical practice and sacramental life very close to Catholicism.  They confess the same Creed with us, and they also baptize their infants.  So, there are many things that are familiar to the Catholic within Lutheranism, but there are also differences, the most primary being the notion that the Church can be divided.  To Catholic thinking, the Church’s unity is essential, commanded by Christ and recognized as essential by the Church Fathers.  This unity is and forever has been based on the holy orders established in Apostolic times and centered around ancient primal sees of the Church, the foremost being that of the Papal See in Rome.

The pope, then, becomes the living center of the Church.  God save us from bad popes, but good or bad, the pope is important to Christian unity.  Those who argue otherwise have history as their judge.  This does not mean that every pope has been a saint (hardly).  What it means is that Christian unity is important, and that this unity has to have a center and that center is the Petrine See.  The pope, as the successor of St. Peter, is an international, pre-national, and extra-national force that reminds us that our Catholic Faith predates our modern languages and countries.  Catholicism usually gets most in trouble when it becomes too intimately tied to the state.  Lutheranism thus became an essential tool in the nationalistic designs of German princes, but Lutheranism also spread north into the Baltic and Scandinavia states.  Its advent ushered in divisions and wars that would have consequences to untold generations.

Still, the Church needed reformation.  Sin is always present among God’s people.  The problem is we can’t separate from others and expect sin not to follow us, because we are all sinners.  Luther had seen corruption in the Roman Church and he wanted to expose it and separate himself from it (which seems, at first glance, admirable), but in the end, his fiery polemics isolated him and his followers.  Luther didn’t just reject the pope’s authority; he judged the whole Catholic system.  Martin Luther, ever the contrarian, declared the pope the antichrist (which has been unfortunately repeated often by subsequent Protestants, like Calvin, Knox, Cranmer, The Westminster Confession of Faith of 1646, The Baptist Confession of Faith of 1689, and John Wesley).  Luther called our Catholic Church an unchristian and faithless “synagogue of Satan,” and declared that Catholics were part of some Great Apostasy and that the pope was pagan.  Such accusations have been prevalent in Protestantism from its conception for, after all, Protestants are protesting!

As a monk and theologian, Luther certainly had justifiable cause in some of his critiques of the scandalous state of Catholicism in his day, but instead of healing it through obedience, he saw it as irredeemable.  He tore himself from it in 1517, along with many other Germans.  The rationalization for the break was the argument over the doctrine of “justification.”  Luther had many objections with Catholic belief.  He was upset with any notion that we might sacrifice or help in atoning for others or ourselves by way of prayers or penances.  He claimed that it was grace and faith alone that could justify a Christian before God.  As a monk who renounced his vows to marry a nun, Luther became a great critic of clerical celibacy.  As a biblical scholar, he was not sympathetic towards philosophy.  As someone who had so famously clashed with Rome, he rejected the papacy and Canon Law and the tradition they represented.  Instead, Luther declared that Scripture alone was the foundation of his reform.

Luther admired music and used it to express his doctrine.  He himself wrote hymns and hymns became a large part of their liturgical tradition.  Lutherans did not reject the Mass, but kept it, so Johann Sebastian Bach composed many Lutheran Mass settings as well.  They also retained the Catholic practice of praying a Liturgy of the Hours.  Their clergy tend to be learned, having studied Hebrew and Greek.

Lutherans came to Georgia in 1734 from Salzburg, and they settled in New Ebenezer (near Savannah).  They were instrumental in the Revolutionary War, and Georgia’s first elected governor was Lutheran.  Today, there are nearly forty Lutheran sub-denominations in the United States alone.  Some are more “conservative” in that they still hold on to the older moral teachings that would be more in line with Catholicism.  Others are more “progressive” in their thought.  Some of these more “progressive” Lutherans might have a form of contemporary worship that uses contemporary music.  Some have closed communion (only with folks of their own variety), whereas other Lutherans might have an open communion, even with Anglicans.

There has been much effort in recent years towards ecumenical talks between some Lutheran groups and the Catholic Church.  This work is a long process, with small steps taken towards what may be a reconciliation generations from now, though this work is by no means universally embraced by all 60 million plus Lutherans in the world.  But every effort to speak to one another in a civil way, as our Lord would want, may help in the eventual healing of this schism and sad division between Christians.