What’s in a Carol? 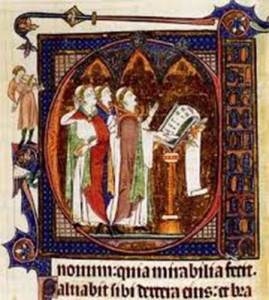 The season of Christmas gives us many great musical treasures, some of which are in our wonderful St. Michael Hymnal.  Number 691 for example, Of the Father’s Love Begotten, is the English version of poem written by a man by the name of Marcus A. C. Prudentius around the year 410 A.D.  Imagine that!  Whereas that ancient hymn was originally written in Latin, the tradition of vernacular Christmas songs began around the 12th century.  One of the oldest hymns in English dates from this time and originated in the County of Wexford in Ireland, thus called the Wexford Carol.  It is a proclamation of the birth of Christ that begins with the words,

“Good people all this Christmas time,
Consider well and bear in mind
What our good God for us has done
In sending his beloved son.”

Still, that stunning proclamation is more of a solo or sequence than what we think of as a Christmas carol.

Carols were originally popular songs for dancing and drinking.  We can associate the oldest of our known Christmas carols to medieval madrigals and 15th century “wassailers” who sang their music at feasts in mead halls filled with lords, knights, and ladies.  Most of those old popular songs are lost to us, but some of them were religious, and some of those have been preserved.  Still, it took a while for carols to make their way into the Mass.  Most of the carols we think of are from the 19th century, as it was then that the tradition of the Nine Lessons and Carols began to be a part of the Christmas Eve tradition.  This was a time when Protestants were rediscovering Christmas, so new carols were being composed for their services.  All that having been said, there are some Christmas carols that, for various reasons, bear mentioning by name.

There are so many great Christmas songs old and new, and most of them have interesting stories which can be a source of inspiration for us.  As you listen to your Christmas music, you might want to look up the origins of some of your favorite carols and learn more about the history of them in this most joyful season of the year.