What is a Parish? 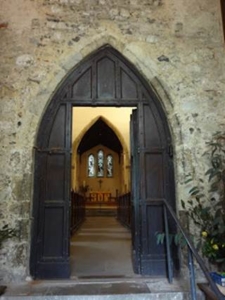 The dictionaries tell us that our English word “parish” comes to us from the French language, but if that is the case, the French were using an even older Greek word, “paroikia.”  It seems the meaning of this word originally had the connotation of “sojourning in a foreign land,” but it became associated with “the dwelling place of the sojourner.”  How the idea of sojourning got associated with a geographical division within the Catholic Church is an interesting one.

It was Saint Martin of Tours (d. 397 A.D.) who famously began to make trips out into the forests of Gaul (modern day France) to encounter the pagans.  Heretofore, Catholicism had been a religion of the cities with cathedrals and bishops, spreading along the excellent Roman roads.  But Martin was fearless and wanted to take the light of the Gospel to the people who lived in the dark forests and practiced their old ways.  Thus, he began to take the paths into the woods in search of the people who were not yet converted to Christ.  These people were often Celts with their own pagan religion, filled with fantastical stories that became the sometimes terrifying stories of our fairy tales.  These Celts might have also held onto old Roman gods long after they had been forgotten in the cities.  So when this sojourner, St. Martin, would visit a place, he would often encounter a hostile, suspicious people.  Nevertheless, he would preach the Gospel to them and establish a little church.  Eventually, he would move on to another place, leaving behind one of his monks or priest in charge of the church.  This process became the model for establishing parishes, or dwelling places for the sojourners.

St. Martin was the man who had brought the idea of monasticism to the west.  In some ways, Martin’s was a monasticism interrupted.  He had wanted to be a hidden monk, to go out into the wilderness, but he had been made the bishop of Tours.  However, Martin was not content to stay within the city walls.  He felt an urge to go out and he had the courage to walk into places where Christ was still unknown.

And thus Martin’s particular flavor of monasticism necessarily became associated with this work of preaching and establishing missions that would in time become parishes.  The Benedictines are the oldest monastic order in the west, and their work in establishing the kingdom of God in far flung and remote places is legendary.  St. Benedict (d. circa 542 A.D.) had a great devotion to St. Martin and continued this idea of leaving the cities and going out into the country to establish monasteries.  From those remote monasteries, monks would be sent out to rural places to preach, and soon they would found a mission, and in time a parish would emerge.  As the Roman Empire collapsed and cities sacked or burned, the monasteries became all the more important in future generations as centers of learning, charity, art, and worship.

As English-speaking Catholics, we should appreciate that the Benedictines were the monks who took the Catholic Faith from Rome to the Anglo-Saxons.  It was Saint King Ethelbert of Kent (d. 616 A.D.) who required that first missionary, St. Austin, and his Benedictine monks to establish our Faith and their order throughout his realm.  St. Austin became the first Archbishop of Canterbury, but it was a later archbishop of Canterbury, the Greek scholar driven from the east by militant Islam, St. Theodore of Tarsus (d. 690 A.D.), who began to use the term that would become our English word “parish.”

Just as in France, these dwelling places of those earliest monks became the oldest parishes in England, some (not surprisingly) named after St. Martin.  No one can doubt the importance of the monks in the evangelization of these and many other peoples throughout Europe.  Sometimes, the monks would establish a parish in an existing village; other times a village might grow up around a monastery or a parish, but the link between the secular kingdom (the village) and the ecclesial structure (the parish) was established from the beginning, and in many other parts of the world this same pattern continued.

Our parish – Our Lady of the Mountains – was established not by Benedictines, but by the Missionaries of LaSalette.  Because our neighboring parish was also established by the LaSalette Fathers, and actually dedicated to (and named for) Our Lady of LaSalette, our particular praying community here in Pickens County chose another title of the Virgin in the naming of our parish, and thus our feast day was eventually established as the Holy Name of Mary (which falls a little over a week before the feast of Our Lady of LaSalette).

Of course, in so many ways, a parish is much more than just its history or the etymology of the word “parish.”  A parish is the branch or franchise of the universal Church.  Parishes are one of the principle building blocks of western culture, and this spreading kingdom continues today.  A parish is the practical means by which the Church continues to live out the mandate of the Lord to go out into all the earth and proclaim the good news, baptizing all the nations in the name of the Holy Trinity, forgiving the sins of the wretched, and keeping the memory of our Lord through the eternal sacrifice of the Holy Mass.

While we cannot all live in, or even go to, Rome (or for that matter, go to our cathedrals), when we are in our parishes, we are in union with Rome and with our cathedrals.  Parishes are a focus and tool for the promotion of Catholic unity.  But a parish is also a family of the faithful, who gather with their priest around a sacred altar, offering up the ancient prayers they have learned from of old, prayers that have been passed down for centuries.  In parishes, we Christians strive to live out our Catholic Faith in holiness and in joy.  It is in the parish where the word of God is proclaimed daily.  And a good parish should be a place of charity for the community, a place to retreat to for prayers, a place to seek out counsel or forgiveness, a place to come at those most important times in a family’s life (baptisms, weddings, funerals), a place to find communion with the saints of God, and in many ways a gate into heaven itself.  Parishes should be holy places, filled with memories, the faint smell of incense, and places of peace and gentleness.  Parishes are essential to the life of every good Catholic.  Through the parish, the kingdom of God is extended in this place, but also throughout the world.