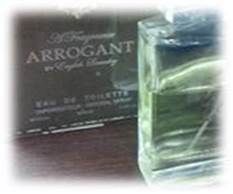 Men rarely like to shop, period, and when we buy suits, we usually buy enough not to have to go shopping again for years.  In late May, I made my second trip to the store to pick up the suit and trousers that had been altered by the tailor, and while I was waiting for the sales clerk to return from the back of the store with my garments, I had a moment to stare at the colognes displayed nearby the front desk.  I was just trying to sneak in and out, and I didn’t want to draw attention to myself, but I ended up laughing rather uproariously when I saw the name of one of the colognes, which was (this is not a joke) ARROGANT.  The bottle and packaging were elegant, and I have no idea how it smelled, but I could not believe that anyone actually would buy this stuff (given the name).

I immediately imagined for whom I might buy this as a gift (which was not particularly charitable of me), but really, do people not know what ARROGANT means?  When someone is arrogant, it means they are full of themselves, they are conceited, and they have an exaggerated sense of their own importance and abilities.  Why, then, would one buy a cologne named that?  Now, again, I did not try the fragrance, but really, what is next?  A cologne named JERK or maybe EGOTISTICAL?  I understand that it is important for businessmen to exude a certain power in their business, but have we really gotten to the point where we even gleefully claim our narcissism?  Let us be clear, arrogance is not an attractive trait (though the world seems to be full of it at the moment).

By contrast, I would like to close with a Catholic prayer that was composed in the last century by Rafael Cardinal Merry de Vall (d. 1930).  He was the Vatican’s Secretary of State, which means he was a pretty powerful man, but he prayed this prayer as a part of his daily routine.  It is called the Litany of Humility:

O Jesus! meek and humble of heart, hear me.