We Disappear in 20 Years 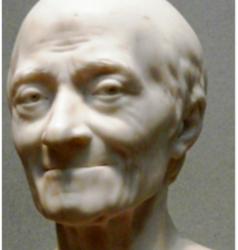 You may have read recently that Christianity is disappearing in the west, and some clever scientists have put together a model for proving this mathematically.  There is no question that we live in a time when apostasy is everywhere, but predictions about the end of organized religion are often about as accurate as fundamentalist preachers’ predictions about the end of the world.

Consider the case of Voltaire.  It would be rare to find a Voltaire scholar in Georgia, as that scholar would have to have studied thousands of books, tracts, and letters to really comprehend the mind of this eighteenth century Frenchman.  Voltaire’s progressive intellectual influence was great, even if unconventional.  We can take the word of his contemporary, Wolfgang Amadeus Mozart, who referred to Voltaire as an “arch-scoundrel.”

Voltaire was well educated, but eventually became a freethinker, that is, one who refuses to accept established views or teachings, especially on religion.  He was part of the so-called enlightenment period.  He was a deeply sarcastic writer who mocked social conventions, and he said and did shocking things.  For example, he never married, but carried on serial affairs throughout his life, including moving in with, and becoming the lover of, his own niece.  He was anti-Semitic.  He had no love for Islam.  He saw Protestants as fanatics.  But his most vitriolic hatred was reserved for Catholicism.  With skilled duplicity of speech, he would mock the Church and then, on Easter Sunday, scandalously go up to Communion.  He dismissed Christianity as ridiculous and absurd.  He rejected the divinity of Christ and the teachings on the Trinity (erroneously imagining that these were late innovations in the Church).

Even though Voltaire had received his education at the hand of the Jesuits, he and other philosophers of his day later sought to re-found education upon ‘enlightenment’ ideals of secular knowledge by contributing to the new Encyclopedia that attacked the Faith and the Church both directly and indirectly.  In his letters, Voltaire would sometimes use the salutation “Let us crush the Wretch,” which was reportedly a code for the cursing of Christ.  He became a Freemason in the last month of his life.  He was considered an essential philosopher behind the French Revolution.  That tragic, genocidal, chaotic collapse of reason based on ‘enlightenment’ principles began just years after Voltaire’s death.

There are legends that in his last days, nurses and physicians overheard his deathbed regrets.  But if true, it would be quite a reversal after a lifetime of making himself the enemy of the Church, not to mention that he had just become a Freemason!  Voltaire reportedly predicted that Christianity would disappear within 20 years.  Voltaire died in 1778.