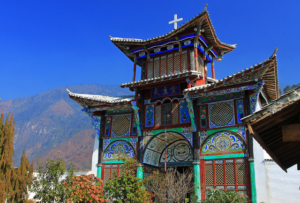 Buddhism is a 2,500-year-old doctrine that absorbed a lot of the eastern pantheistic and polytheistic religious beliefs of its day, but included a monastic tradition with an emphasis in aestheticism and contemplation.  This contemplation is to help the adherent to achieve the fullness of emptiness (if you will) by enlightenment and nirvana (that state of contentment without desires within a motionless and dreamless sleep).  Buddhism is very different from Catholicism, but historically speaking, Buddhism and Christianity grew and expanded simultaneously, though Buddhism soon divided into various schools of thought.  Born in India and emerging from Brahmanism, Buddhism picked up traits from Taoism in China and absorbed other beliefs and practices along the way as it moved into Korea and Japan.  Depending upon where and when they lived, some Buddhists might characterize their religion as more a non-theistic philosophy, especially if they learned it from a spa masseuse or modern day yoga instructor (but yoga comes from Hinduism, where gurus practice it even today).

Initially, Buddhism started in India, where there is the belief in reincarnation.  Buddhists saw reincarnation as a burden and wanted to escape its trap.  Proposing that individual existence was but an illusion, Buddhists taught how to find deliverance from this delusional individualism.  Living as homeless beggars and renouncing the prideful world and its ambitions and vanities, these gentle gurus or monks subsisted on meager meals, owned virtually nothing, and sought to forgive others and live virtuous lives.  While these monks and nuns hoped to achieve nirvana, other people who had sympathy for their beliefs began to associate themselves with their monastic tradition.  Lay Buddhists might not be able to achieve nirvana, but they could hope for a bit of joy and peace, and then they might decide to strive for nirvana in their next life.  Over time, their principal teacher, Buddha, became so revered that he rose to almost the level of a deity.  He could be honored, but his having achieved the individualistic extinction of nirvana, how could Buddha really care for the intentions of earth-bound Buddhists?  Buddhists needed personalities to pray to, so they absorbed the deities of old from Eastern cultures, and imagined heavenly future Buddha’s looking down at them, concerned with their wellbeing.

Buddhism came to Tibet (sometimes called the Roof of the World) in the seventh century by way of northern India.  This highly polytheistic form of Buddhism included among its pantheon the three-eyed god Shiva.  It was the conqueror, Kublai Kahn, who established a lama (or head monk) there in the thirteenth century and his modern day successor is considered to be the Dalai Lama.  Whenever a Dalai Lama dies, a child is chosen about nine months later to be his successor and to live in the famous and imposing monastery in Lhasa.  Tibetan Buddhists believe that this Dalai Lama is not only the enlightened guru who rules over and speaks for Tibetans, but he is also seen as the incarnation of Avalokiteśvara, who was a follower of the Buddha, who is said to have achieved nirvana, and who Tibetan Buddhists believe benevolently looks down upon them with his/her many arms in the avatar-like human form of the Dalai Lama.  The present Dalai Lama is the fourteenth of these successive “incarnations.”  Since 1950, the present Nobel Laureate Dalai Lama has lived in exile for having spoken out for freedom and against oppressive Chinese Communism.

While anthropologists will point to outward similarities between Buddhism and Christianity (and here Buddhism might have absorbed certain ritual and traditions from the Nestorians of old), theologians know that there are also many, many fundamental differences.  Catholics are not Buddhists.

Believe it or not, the Gospel has even permeated into Tibet with its towering mountains and twenty-languages.  Tibetan Christianity predates Communism (that tries to regulate it into oblivion) by 1600 years, and in some ways may even predate the arrival of Buddhism.  The original unorthodox form of Christianity that arrived was Nestorianism, but today, Tibetan Catholic villagers remain, and they have persevered in the Faith for half a century without priests.  It is estimated that there are some 10,000 Catholics in Tibet, but only one priest.  Imagine!  So pockets of Catholicism exist, surviving in remote villages which are sometimes approachable only by foot or mule.  Within these few valleys where our co-religious live, Catholics are still drinking the red wine made from the seeds brought by European missionaries.  And despite generations of political upheavals and pogroms, and despite all the times missionaries were killed or expelled, and despite the fact that in places even their churches were taken away from them, these Catholics still pray that one day priests will return to them after the long winter of Communism ends.  In the meanwhile, they honor the tombs of their first missionaries, and celebrate the holidays of the Church as best they can without priests.  They still pray the Pater Noster in Latin, and some still cling to the last drops of holy water long ago brought from Lourdes.

Our Lord is the embodiment of wisdom incarnate, and He teaches us that our individuality is important and will go on forever.  We are not meant to disappear into nirvana, but called to life eternal with Christ.  When folks look east for wisdom, they often lose themselves in the clouds of the mythical Shangri-La.  But Catholicism provides us not only monasticism and contemplative prayer, but calls us to accept our lives as beautiful, and our individuality and uniqueness as essential to who we are.  We are created by God, and called to live forever in Communion with Him.  With the sublime teaching of the Trinity, the beautiful liturgy, the wisdom of so many great doctors and saints, there is nothing that we should envy in Buddhism.

How do we bring Buddhists to the God of Jesus Christ?  How do we share with them that divine Teacher who is above all earthly wisdom?  Pray for them, and pray that our Catholic brothers and sisters in remote Tibet will one day have the answer to their prayers when the priests can return to pastor their people.