The Saintly Bishop of Antioch 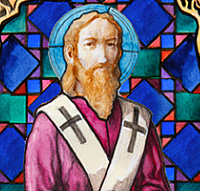 In recent months, Syria has been front and center on the world stage as various factions within Islam struggle for supremacy, and as Christians are being systematically targeted and caught within the crosshairs, killed, forced to convert to Islam, or forced to flee as refugees. This exodus of Christians and genocidal struggle has been occurring largely while our outside world has stood by helpless and disinterested.

The Levant, however, should be close to our Christian hearts, as in many ways, it was the birthplace of our faith. Saint Peter himself founded the Church in Antioch, and Antioch is where followers of the Christ were first called Christians. Many of those ancient Christian communities still worshiped in the language of our Lord up until the time when their churches were desecrated and burned down, their priests and nuns murdered, their women raped by ISIS/ISIL (operating under fatwas!), their young girls kidnapped and forced to “marry” Muslims, and their communities dispersed by militant Islam.

The Year of our Lord 2014 has not been a good year in Syria, and we need to open our eyes to the tragedy, and close our eyes in prayer, petition and supplication, as these crimes cry to heaven. The Christian Martyrs of modern-day Syria no doubt call out in prayer to our Lord at their deaths, but also likely ask for the prayers of one of their greatest saints, Ignatius of Antioch, who was himself martyred in or around the year 108 (his feast day is celebrated on October 17th, and Ignatius is just one of the saints who will be immortalized in a stained glass window in our parish church in the months to come).

Saint Ignatius of Antioch is called one of the Apostolic Fathers of the Church. He was himself a disciple of Saint John the Apostle. But after the Apostles were all buried, it was left to this next generation (his generation) to carry on the traditions. Saint Ignatius was thus the third bishop of Antioch, which was a Christian community deeply respected all around the Catholic world. At the time, Syria was a Roman province, though Ignatius was Greek in ethnicity.

Because Ignatius had personal memory of Apostles like Peter and John, he was greatly venerated by followers of the Christ. Thus it was no small cause of scandal when the elderly and revered Ignatius was arrested under the persecutions of the emperor Trajan. Ignatius was, however, by no means the only martyr in his day. Keep in mind these persecutions were so terrible that even pagan historians lamented the fate of Christians, stating that thousands were slaughtered daily at the height of these persecutions. In all of this, Ignatius, himself, would be arrested and sent to Rome where he was thrown into the arena to be torn apart by wild beasts.

In route to Rome, Saint Ignatius wrote letters to the various ancient churches, encouraging his fellow believers. Saint Ignatius was killed in the Coliseum, and the Roman Christians piously gathered up what was left of his body for burial. His relics rest in San Clemente, one of the most ancient churches in Rome, and Ignatius is one of the martyrs mentioned in the Roman Canon (or Eucharistic Prayer 1).

Because of the fame of Saint Ignatius, his seven letters have been preserved and read ever since. When we read them today, we have a glimpse into our ancient history, and as such, they are particularly interesting from that perspective. So then, what can we learn from Saint Ignatius of Antioch? Well, through his letters, we have a snapshot of the early Church. Ignatius is the earliest extant Christian writer to use the word “Catholic” to describe the Church (which means universal), though Ignatius uses it in such a way that it is evident it was already in use before his letters. Ignatius is writing to churches all over the world, and we see the international or imperial nature of the Church through his letters.

Ignatius insists that the holy Church is essential to our salvation, and that Christ instituted the hierarchy of the Church for the sake of our salvation. So we see through Ignatius that bishops are essential in keeping the Church unified, and that there is a clear understanding of apostolic succession (that these bishops are successors to the apostles). Ignatius encourages his readers to be loyal to their diocesan bishops, who were being assisted by priests and deacons. Ignatius (even with all his fame) recognized the primacy of Rome in the early Church.

Ignatius called upon Catholics to honor Christ, who he reminded them was God in the flesh. Ignatius also wrote of the importance of the “Eucharist” (using that word), saying that heretics should abstain from the Eucharist unless they confess that the Eucharist is the flesh of our Lord Jesus Christ. Ignatius esteemed the virtue of virginity and praised the sanctity of matrimony. Ignatius also stressed the importance of the Lord’s Day (Sunday) over the Jewish Sabbath (Saturday), and showed that from apostolic times, Sunday (the day of the Lord’s Resurrection) was of great important to us as Church. Ignatius hailed the cross as the symbol of Christian victory, and he was fearless in the face of martyrdom. Ignatius actually hoped to be given the privilege of martyrdom in Rome, so as to give witness to Christ.

Now and again, our parish gets letters still from bishops in Syria today, telling us of the atrocities the faithful are enduring in our dark times. We post these mailings on our bulletin boards in the Narthex. We may live in the rural South, but we appreciate that the Christians in Antioch are our brothers and sisters, and that we should still be one in the sacraments. And so in our personal prayer, we might invoke Saint Ignatius to encourage the Church with fortitude in times of persecution, but we should also look to him to give us the wisdom to stay the course as Catholics, and to remain always in the Church that goes back to the beginning.

Friends, as Catholics we should never stop reading the seven letters of Saint Ignatius of Antioch. Many well-meaning Protestant neighbors would also benefit from reading Ignatius of Antioch, as they so admirably want to believe that they are living “like” the early Church, whereas Ignatius reminds us that as Catholics “we are the early Church,” and that Catholic doctrines and dogmas are not something new, but that they go back to apostolic times. And so on this Feast Day of Saint Ignatius, let us pray for the suffering Church in the East, and let us continue to learn more about our Faith so that we can be strong advocates for truth in our age. Saint Ignatius of Antioch, pray for us.

This homily was given at Our Lady of the Mountains in Jasper, Georgia the weekend of October 18th / 19th, 2014, which was the weekend closest to the Feast of St. Ignatius of Antioch. The accompanying watercolor sketch is a detail of a planned window of Saint Ignatius that we hope will one day be in the nave of our church. Meanwhile, in modern-day Syria, the chaos of war rages on unabated, and the Christians of the Levant suffer.