The Martyrdom of Father Coyle 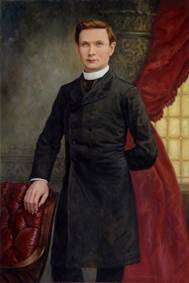 The Reverend Father James Coyle was born in Ireland on March 23rd, 1873.  Desiring to become a priest, he was educated at The Pontifical North American College in Rome (where Father Byrd attended, Bryan Kuhr is attending, and Avery Daniel will attend).  After ordination to the priesthood, at the young age of 23, Father Coyle was sent to the then-Diocese of Mobile, Alabama to serve out his priestly ministry.  In 1904, Father Coyle was assigned as pastor to St. Paul Roman Catholic Church in Birmingham, Alabama (St. Paul’s would become a Cathedral in 1969 when Birmingham became a Diocese).  He became the chaplain to the Knights of Columbus’ local chapter and was known widely for his devotion to the Eucharist and to Mary.  He was also a vocal opponent of the Ku Klux Klan, which was composed of white Protestant men who were rabidly anti-Catholic, anti-Jewish, anti-black, and anti-immigrant and which, at the time, held enormous power in Birmingham.

On August 11th, 1921, Father Coyle performed a wedding between a young woman, Ruth Stephenson, and Pedro Gussman, a Puerto Rican she had met five years earlier while he was working on her father’s house.  (Several months before the wedding, Ruth had converted to Roman Catholicism).

Just hours after the wedding, Father Coyle was shot in the head and killed on the porch of St. Paul’s Rectory by Ruth’s father, E. R. Stephenson, a Southern Methodist Episcopal minister and a member of the Ku Klux Klan.  Mr. Stephenson had refused to consent to the marriage, because Gussman was a Catholic immigrant (and supposedly because Gussman was of dark complexion, although Mr. Gussman was of Castilian ancestry).  Mr. Stephenson was tried for murder and found not guilty, which was not surprising considering that all but one of the lawyers were Klansman, as was the judge and some of the jury.

Father Coyle was thus a martyr, killed for his Catholic Faith.  His profound respect for human dignity, a woman’s right to marry the man she loves before God, and the Sacrament of Matrimony make him a bright example for priests and all Catholics, but especially to us Southern Catholics!