The Emptying of Lent 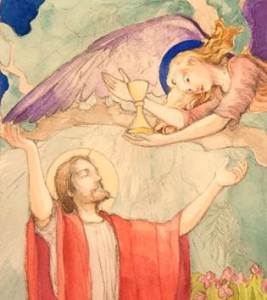 The wonderful artists at Beyer Studio tell us that they are on track for installing our Garden Windows in the Narthex by Easter.  If their self-imposed deadline holds, then it would make a wonderful and timely gift as each of these two stained glass windows relate one of the mysteries of Holy Week:  the Agony in the Garden (which will be our western window that will catch the afternoon light), and the Noli Me Tangere (Touch Me Not) Window, depicting the meeting between our risen Lord and Mary Magdalene (which will be our eastern window that will be beautiful with Easter morning light this April 5th, 2015).

As both of these events in the life of our Lord take place not only within Holy Week, but also within gardens (hence the designation “Garden Windows”), these subjects seem like perfect transitional concepts from the exterior of the church to the interior.  And like the great Magnificat Windows already installed behind the altar, these two Garden Windows will also include some texts of music from our Catholic tradition.  The Noli Me Tangere Window will include part of the beautiful Easter Sequence where Mary Magdalene gives witness to having seen the risen Lord, whereas the Agony in the Garden Window will include part of a text from the Kenosis Hymn that is quoted by St. Paul in his Epistle to the Philippians.  Given that, it would seem a good Lenten reflection to ponder the Kenosis Hymn, its history and meaning.

First, St. Paul writes his Epistle to the Philippians about two years before his own martyrdom.  Paul had already established their Church in Philippi some years earlier (his first missionary effort in Europe), so he is writing to these Macedonians to thank them for supporting his missionary efforts in other lands, as they were generous to his ministry.  Paul, together with Timothy, writes this epistle while in jail.  Paul is cognizant that he is facing an upcoming trial in Rome, where he will likely face death, but this fills him with optimism.  Within Paul’s letter we find (in the second chapter) what scholars refer to as the Kenosis Hymn.  Because of the structure of the Greek, they believe that St. Paul is quoting a hymn within his prose, and if they are right, then the Kenosis Hymn is one of the three or four oldest specifically Christian canticles or hymns that we have from our Bible.

This hymn (Philippians 2:6-11) is called the Kenosis Hymn because of a Greek word that is central to this passage.  In the context of this hymn, the word Kenosis implies a pouring out or an emptying of oneself, and this mystery is at the core of Christ’s earthly life.  The Word of God empties Himself just by becoming human at the Incarnation, a mystery that is worthy of a song of praise, yet when our Lord chooses the Incarnation, He also chooses mortality, and wonder of wonders, it is not enough to die, but He must be rejected and accept the terrible death on a cross.  In all of this, the emphasis is on obedience.  Somehow this wonderful truth is a part of the Divine Plan for salvation.  Thus does our Lord’s obedience become a model for us – we should learn and practice just such obedience in our own lives.

But keep in mind, Paul is likely quoting a hymn here, and if so, that means the Christians from the earliest days of our Church were singing this mystery in their offerings of praise and prayer.  The structure of the Kenosis Hymn is a model for almost any Christian hymn, and not coincidentally, many of the hymns we sing from our St. Michael Hymnal are built upon on this scripture even today (At the Name of Jesus, All Hail the Power of Jesus’ Name, and Of the Father’s Love Begotten just to name a few), so in a real sense, we have never stopped singing this hymn.

So as we move through Lent, we are called to reflect upon these mysteries even more so than usual.  We reflect upon the mortality of Christ with our Friday Stations of the Cross and our services on Good Friday.  Certainly we reflect upon our own dying to self, and strive to become less selfish and more obedient to God’s will in our own lives during this season of conversion.  In short, this Agony in the Garden window (the original Dark Night of the Soul) might become a focus for our prayer as we await the installation of this beautiful new window in the spring.  And while we can’t see the window during this Lent, we might anticipate it throughout the season by reflecting upon the Kenosis Hymn of Philippians, which was likely being sung by our Christian ancestors in Palestine while the Apostles were still alive, and with which we hereby close:

Though He was in the form of God,
Jesus did not regard equality with God
something to be grasped at.

Rather, He emptied himself,
And took the form of a slave,
Being born in the likeness of man;

He was known to be of human estate,
And it was thus that He humbled himself,
Obediently accepting even death,
death upon a cross!

Because of this, God greatly exalted Him
and bestowed upon Him the name
that is above every name,

so that at the name of Jesus
every knee shall bend,
those above the earth,
and on earth and under the earth,

and every tongue confess that
to the glory of God the Father
Jesus Christ is Lord!