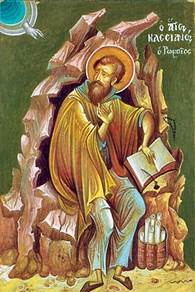 St. John Cassian is in heaven, not hell, but his writings warn us that our anger can bring about our own damnation.  He introduced Eastern monasticism to the west in Gaul, and his teachings greatly influenced St. Benedict.  Even today at Benedictine monasteries, one is likely to hear St. John Cassian’s writings read aloud throughout the year.  His are practical tools for living the spiritual life in common.

There are things for which we might justifiably be angry, like a murder or a robbery or a rape.  If we have had such an experience, we need time to forgive these very real injustices against us, but forgive we must, even as Christ forgave his executioners (and us) for the injustice of the Cross.  Yet, most of the time when we’re angry with folks in our community or family, it is for slights which simply cannot justify our anger, even for a short while.  We would be embarrassed to even articulate them because they are, in so many ways, petty.  Most of the time, our anger is caused when we are denied something we want.  Our egos come face to face with a conflict or an obstacle, and we erupt.  Maybe we want something unreasonable, or expect something on our own timing.

Consider the wrathful child screaming in the stroller at the department store because his or her parents won’t but them a toy NOW!  Maybe the toy wasn’t age appropriate.  Perhaps the parents know that the same toy is already at home wrapped and under the Christmas tree.  Maybe the parents are struggling just to keep the lights on and can’t afford such an expensive toy.  For whatever reason, the answer is no, and now the child is angry and the parents are embarrassed for the tantrum, as are their fellow shoppers, because it is difficult to endure the wrath of others playing the victim.

We’ve used the example of a child, but this is not really a childish matter.  The Lord teaches us that our anger against our brother or sister can actually bring judgment upon ourselves and that when we insult others in our anger, this can warrant our own damnation.  He is very serious about this.  The Lord wants us to let go of anger so it doesn’t poison ourselves and others.  Looking at scripture, St. John Cassian warned us about the dangers of anger.  He distinguished three degrees of anger.  First, there is the interior anger we might have in our hearts without expressing it.  That anger can be unbeknownst to others, and we can let it abate unexpressed.  Then, there is the anger that bursts out in wrath, in words, in insults, or in gestures.  Now the person knows we’re angry with him/her.  We can ask forgiveness almost immediately for this, and thus hope to reconcile right away.  The Lord wants us to seek peace, and so we’re told not to let the sun go down on our wrath.

But thirdly, there is the long cultivated anger that we refuse to let go of, prolonging our anger by our sulking.  We might say we’re over our anger, but really we are deeply attached to it.  This is when we might avoid people or refuse to talk to them, as we are seemingly incapable of showing them pleasant civility.  We imagine that because we are not confronting the person, we are not doing wrong, but really we are just burying our anger within our hearts and cherishing the anger that we’re unwilling to let go of.  Holding a grudge is being unwilling to forgive, and make no mistake, this is a kind of revenge, and in the word “revenge” is the root of another word – vengeance.  The Lord wants us to leave vengeance to Him.

St. John Cassian tells us that this third type of anger is very wrong for the Christian.  It doesn’t take a genius like St. John Cassian to tell us how detrimental the consequences of this last kind of anger would be in a monastic community, family, or even parish community.  In this we need repentance.  This is why we exchange a sign of peace in the liturgy, because scripture tells us that our worship and sacrifices do us little good if we cannot first forgive our brothers and sisters.

Okay, so maybe you are a passionate person who tends to show anger and wrath too easily, and then maybe you tend to sulk and hold grudges.  Some families, let’s face it, are more melodramatic than others, and they tend to wear their emotions on the sleeves, and can carry out strife seemingly forever.  But you know what?  All of that can isolate you terribly.  Maybe you’re trying to punish the person you’re mad at, but really you’re just stubbornly tearing apart the family, and ruining Thanksgiving dinner for everyone!

So, if you sulk, how can you improve?  Well, first you need to forgive, and then you need to ask for forgiveness.  You need to appreciate that the sulking is not only punishing the one with whom you are angry, but also your mutual friends.  They might feel like you’re asking them to choose between you or the person with whom you’re angry.  Moreover, this anger is also killing you interiorly and making you difficult to be around!  People are beginning to wonder if you won’t explode like a bomb on them sometime, and if you will suddenly close them out of your world.  Ever notice how our rancor can bring such a spirit of negativity into the room that folks start to leave us alone?  This is how the devil uses our anger to bring discord into a community.

If you really want to change, besides confession and repentance, there are virtues to cultivate.  Patience and meekness may seem like weaknesses to the outside world, but the Christian masters tell us these are manly skills that take diligence to master.  Patience is learning to accept suffering, and meekness is renouncing that willful aggression that too often leads to wrath.  Our ability to forgive those who may have slighted us, or who we believe may have insulted us, or who have in some way not given us what we wanted when we wanted it – this forgiveness of them is important to our own salvation.

Within our own families, it may be true that our parents could not love us the way we wanted, but if we, as adults, don’t forgive them, then are we any better?  Are we perfect parents or perfect spouses?  Would we want our own children or spouses to be as angry with us as we are with others?  Our spouses, siblings, children, and co-workers all have weaknesses, but no doubt they also have strengths.  Too often we keep pointing to their splinters without seeing the beam in our own eye.

Sometimes we use our sulking to try to manipulate others into affirming us in sin, too, which is very wrong.  As good Catholics, we should love sinners, but we cannot love sins, so if you want us to affirm your sins, we cannot, and your sulking won’t change a word of the catechism!

St. John Cassian brings all this up because it is important and because it has consequences into eternity.  Why?  Ultimately, hell is a place full of wrath, in part because some of those who inhabit it are the folks who couldn’t forgive others.  They took their own wrath with them to the grave.  They are angry into eternity because they did not get what they wanted in their own time.  They demanded their rights and called everyone to respect their freedom, but boldly infringed upon the rights and liberty of others without respect.  Finally, when the Lord asked them to forgive others, they refused the Almighty.  Maybe they were even resentful of God for asking them to forgive others, and thus hell might be said to be peopled by those who ultimately could not let go of their grudge against the Lord.  Like the child who throws a tantrum to have a toy, they are unrepentant in their wrath, and thus left all alone to sulk for eternity.

Imagine!  God wanted to give them heaven, but they demanded happiness on their own terms, and would not grow up in His grace.  Maybe they got what they wanted.  And maybe they got to hold on to their grudges forever too, but sadly, they missed the point of life, because the Lord wanted them to become saints.  For us, there is still the chance for conversion (indeed, the necessity of conversion).  We have time to forgive and to forget.  But will we?

During this Lenten season, let us think upon our own responsibility to forgive others.  Maybe we’re so mad at them and they have no idea why!  Maybe we have forgotten why we’re mad.  Maybe, upon reflection, our anger seems irrational and manipulative and even childish.  How can we let go of our grudges, and move forward?  Maybe we’re afraid of getting hurt by others, but really, shouldn’t we feel more pity than anger for those people?  Let us consciously decide to leave vengeance to the Lord.  Let us forgive in imitation of a divine act of love, so that Christ can in turn show us His mercy.  Then, we can pray the Our Father and really mean those very, very important words, “and forgive us our trespasses as we forgive those who trespass against us.”