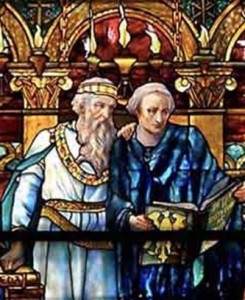 Holy Week is fast upon us and it begins with Palm Sunday.  That means we shall sing, “All Glory, Laud and Honor.”  This hymn was written by Theodulf of Orleans (d. 821) as a commemoration of Christ’s triumphant entry into Jerusalem.  Theodulf was a Visigoth by birth, likely born in Zaragoza, though he had fled his native homeland of Spain to avoid militant Islamic invaders.  In Aquitaine he found a safe place to keep his Catholic Faith unmolested, and there he became a monk under the holy abbot St. Benedict of Aniane (a man who was largely responsible for compiling the Missal we use on our altar every day).  Theodulf’s learning was widely respected, and he advocated for schools and for education in his adopted kingdom of the Franks.  It was Charlemagne who promoted Theodulf to be bishop of Orleans, and Bishop Theodulf (together with Alcuin of York) became an important member of the cultural renewal we call the Carolingian Renaissance.

Theodulf had many virtues.  He was a patron of the arts.  He showed the famous Benedictine hospitality to all pilgrims and to the poor.  His poetic skills were legendary.  And while he composed dozens of hymns, the most famous has become associated with Palm Sunday.  While Charlemagne might not have actually heard this hymn (there is evidence that it may have been written a few years after his death), in many ways it was Charlemagne’s reforms of the Church, his love of worship and the arts that made this hymn possible – a hymn that we sing year after year (and far beyond the confines of old Charlemagne’s once great empire).

The most familiar melody for this hymn is in our Saint Michael Hymnal, #412, but this melody is not as old as the text.  Another less familiar version (#413) invokes its more archaic modal chant.  You can click on the link below to hear it chanted in Latin.  Listening to this takes you back to the time of the glittering Court of Charlemagne, who was an advocate for and a protector of the Catholic Church in perilous times.  But the words of the hymn take us back further still, to a Sunday morning two millennia ago, when the King of Kings approached his Royal City of Jerusalem, riding upon the back of a donkey as children cried out along His path, “Hosanna to the Son of David!”