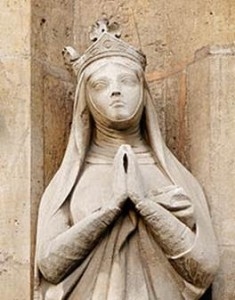 It is hard to find anyone named after Saint Radegund these days, but it is too bad we don’t know her story and more about her period of history in our Church.  First, she was a Merovingian.  “What’s that?” you might ask.  Well, theirs was an important dynasty in what is today France, and they lie buried deep in the foundations of our western culture.  While Radegund was born a Thuringian princess, she became a Frankish queen when she was married off into the Merovingian Dynasty.

This was not a time of gallant chivalry, but more an age of ruthless contests for power.  The Merovingians were barbarians only recently converted to Catholicism, and Radegund’s husband, the king, had five other wives at the time.  After her husband killed her own brother, Radegund had had enough.  She fled the court, and found protection within the Church.  After her husband’s death, Radegund took the habit, was appointed a deaconess and became the founding abbess of the monastery of Sainte-Croix in Poitiers.  As a nun, she read and copied manuscripts, and her love of poetry and learning helped her befriend many important people of her day.

One of these people was a man named Fortunatus, who was Italian by birth, and who had received his education in Ravenna.  Fortunatus had immigrated to Gaul (France), passing along the way to pray at the tomb of Saint Martin, and had come to the Merovingian Court.  He was made court poet and thus chronicled the historical events of that dynasty.  In time, Fortunatus was made bishop of Poitiers (the same city where Radegund’s abbey church stood), and there the bishop and abbess became close friends.

One of the better known poems that Fortunatus wrote is his Vexilla Regis (which you can find in our St. Michael Hymnal #815, with an English version #786).  As it happens, Radegund had contacted the imperial family in the east to acquire a relic of the True Cross for her new abbey.  Radegund charged Fortunatus to write his Vexilla Regis to accompany the procession of that relic to her abbey (in A.D. 569).  In Roman times, the vexillium was the military standard, and the emperor Constantine had replaced the old Roman eagle with the Cross.  We might imagine the pomp of this triumphant procession, including many banners with crosses, as the holy relic was brought into the town and abbey.

The Abbess Radegund died on August 13th, 587.  Her abbey stood for centuries.  The Huguenots (French Protestants) vandalized it, and an “enlightened” mob completed its destruction during the French Revolution.  Still, the song survives.  In English, it is rendered The Royal Banners, and the chant has long become associated with Good Friday.  Click below to hear it handsomely rendered at Notre Dame Cathedral in Paris.