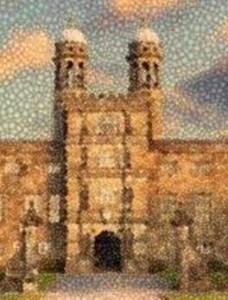 Not far from an old Roman road and the town of Ribchester in the north of England, in the Ribble Valley of Lancashire, there is a beautiful Catholic school called Stonyhurst College that is set like a baronial estate upon three hundred acres of farmland.  Swans ply the long reflecting ponds with distant hedgerows breaking up the rolling, bucolic countryside.  The striking neo-Gothic St. Peter’s parish church rises up out of the lovely gardens, and there is even an observatory on campus.  Catholic students scatter about the campus for sports, convene for lectures inside the hallowed halls, and bound up and down the creaking stairs that evoke its centuries of history.  In a quiet cemetery beneath the shadows of yews, the deceased Lancastrians await the resurrection.  The sturdy local village of Hurst Green lies just beyond the gates of Stonyhurst past the long, straight drive.

Catholic history in this part of Britain is rich.  A curious moss-covered stone cross standing in one of the adjoining fields likely marks the spot where the great missionary, St. Paulinus of York, preached the gospels on a mission some thirteen centuries ago.  St. Paulinus was a Roman sent by St. Gregory the Great to convert the Anglo-Saxon heathens.  Historians tell us that six centuries later, the Stonyhurst estate that would become the college existed (though it might be older still).  The original manor house at the core of the present complex has been added onto many times over the years.  The notorious Oliver Cromwell stayed a night there during the English Civil War in 1648.  This was once the home of the Shireburns (or Sherburnes), who, as recusants, had built secret passages, priest holes, and tunnels to hide the comings and goings of priests from Protestant authorities.  The Shireburns’ clandestine Catholicism was a capital offence, in the strictest of the penal times.  It was the Duke of Norfolk who finally donated the home to the Jesuits in 1794.

In the libraries and collections of Stonyhurst, one can see Mary Tudor’s Book of Hours (the same book that was later in the possession of Mary Queen of Scots on the day she was executed by Elizabeth I).  There are many relics including a thorn from our Lord’s Crown of Thorns, and the eye of Father Edward Oldcorne.  The college has produced eighteen martyrs, so not surprisingly then they have relics, including personal letters written by St. Edmund Campion.  There are a number of masterpieces and important paintings hanging on its walls.  They also have a first folio of William Shakespeare, and until recently, held an ancient copy of St. John’s Gospel that rested in the tomb of St. Cuthbert of Lindisfarne (d. 687).  Sir Arthur Conan Doyle was a pupil here, as were J.R.R. Tolkien’s sons, and Tolkien is said to have drawn inspiration from the environs for his Middle-earth.

But the college hasn’t always been at Stonyhurst.  For generations, it was in St. Omer, just across the Channel in France.  It later moved to Belgium, and then to Liege.  Catholic young men who were otherwise excluded from English or colonial American schools could receive an excellent education there on the European continent.  Many of the Jesuit priests who helped settle the colony of Maryland began their studies at St. Omer’s, as did John Carroll, our nation’s first bishop and the founder of Georgetown, as well Charles Carroll, who signed our Declaration of Independence, and Daniel Carroll who signed the U.S. Constitution.  But with the looming threat of the chaos of the French Revolution, and once the anti-Catholicism of Britain had somewhat abated, the college relocated to Stonyhurst in Lancashire where it has been ever since.  Even still, there continue to be American connections with the school.  For example, one alumnus, George Herbert Walker, was the grandfather and great-grandfather of two recent American presidents.

But even there, sin still lurks.  Even in a place as venerable and as blessed as that, the moral of the story is God’s people barely escape extinction time and again, by some miracle.  Like in Tolkien’s Middle-earth, not even the shire is safe.  The Protestants sought to destroy the Church, but by grace she survived after being cut to the roots.  The French Revolutionaries sought to end the Faith in France, but again even there, it survived.  The world collapses into chaos and wars, but somehow, the Faith struggles on.  Generations of heresy or indifference may be followed by a generation of zeal and faith.  And then that flourishing and confident generation is followed by more generations lost and confused.  The story of Stonyhurst is, in a way, the story of the Church through the generations.

Our heritage is so great, but we too often take it for granted.  Those called to remember too often forget.  We who live in newer parts of the world may not be reminded with every road name or village cross of the Faith, but we are still called to plant the seed of Faith in Georgia as soundly and as deeply as we can.  The saints that planted and replanted the Faith in places like Northumbria may be all but forgotten by many, and yet not by God, and if we have a view towards eternity, then they should not be forgotten by us either.  Most of all, we should never forget the Lord who inspired the saints, and who calls us to become saints.

In our parish church, we have just installed some beautiful icons of saints, and one of those is St. Edmund Campion, whose life is connected to the story of Stonyhurst in many ways.  As we learn more about St. Edmund and the times of his life and martyrdom, it is our hope that we will also learn to appreciate more and more the rich heritage we have as Catholics.

St. Edmund Campion, pray for us. 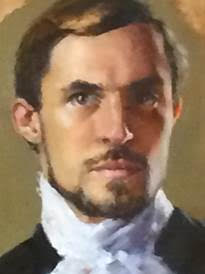