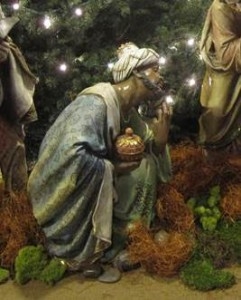 On Epiphany, we recall that the magi brought gold, frankincense, and myrrh to the Christ child.  These were extremely valuable gifts fit for royalty, but they also had symbolic meaning, as the prophet Isaiah had foreseen a time when the Gentiles would come from places like Sheba bearing gold and incense.  This time was fulfilled with Christ.  As Catholics, we use both frankincense and myrrh today as incense in our liturgy.  These sacred resins are still gifts fit for a king, and we offer them as a sacrifice of praise.

Frankincense and myrrh come from trees that grow in the Arabian Peninsula and the Horn of Africa (which includes Ethiopia), and both of these areas are associated with the Biblical Sheba.  Frankincense is the aromatic dried sap from the small deciduous Boswellia Sacra tree.  Once these trees are about nine years old, a shallow cut can be made into their thin bark.  The sap that oozes out in a milky substance eventually hardens into a resin grain and is harvested.  Myrrh (meaning “bitter”) is generally harvested from the Commiphora myrrha, which grows alongside the Commiphora gileadensis, the Balm of Gilead, which the Queen of Sheba is said to have taken as a present to King Solomon.  Solomon’s love for the dark-skinned Queen of Sheba is immortalized in his great Biblical poem, the Song of Songs, and in it, he refers to her being perfumed with myrrh.  Myrrh was and is used in both ancient and modern medicines.  It was mixed with wine and offered to Christ at the time of his crucifixion.

These rare, valuable resins were carried for centuries by camel caravans out of the remote deserts, to Petra and beyond, to as far away as India and China and Rome.  They were not only considered valuable, but also sacred.  Priests of the Old Testament used frankincense and myrrh as incense in their worship, and they used them to anoint their ancient kings and priests.  We use these grains of incense to burn upon coals to produce the beautiful fragrance that surrounds our altar as a prayerful sacrifice.  Catholic priests also use this sacred chrism to anoint us at Baptism and Confirmation.

Much of the incense we burn today comes from Ethiopia, which (as stated above) many believe to be associated with the ancient kingdom of Sheba.  It has been asserted that many Ethiopians had embraced Judaism in the time of the wise Queen of Sheba and very likely, Hebrews were living in Ethiopia from Old Testament times.  Ethiopia may not only be the location of the biblical kingdom of Sheba, but it is currently believed by some to house the Ark of the Covenant!

Ethiopia and Christianity go back to apostolic times.  We know from the eighth chapter of the Acts of the Apostles that Saint Philip baptized an Ethiopian dignitary who was visiting Jerusalem and who was reading from an Old Testament scroll.  Moreover, we have traditions suggesting that Saint Matthew preached in Ethiopia and that both Saints Bartholomew and Mark preached nearby.  Thus, both our Bible and our tradition attest that Christianity in Ethiopia goes back to apostolic times.  In addition, historians tell us that the Greek, Saint Frumentius, was captured off the coast of Ethiopia and he so impressed the king with his learning that he was ordered to tutor the king’s son, and so the royal family became Christian.  Some years later (around A.D. 328), the great African Patriarch, Saint Athanasius of Alexandria, ordained that same Saint Frumentius as the first bishop of Ethiopia.

Some will argue that Ethiopia is the oldest Christian nation in the world.  The Biblical translation used in Ethiopia is translated from the Greek Bible used in Alexandria, and its liturgy is an elaboration of the Divine Liturgy of Saint Mark from the Coptic Church of Egypt.  The ancient language of the current Christian liturgy in Ethiopia is the Semitic language of Ge’ez.  Most of the ancient saints of Ethiopia are included in the Roman Martyrology.  Clearly, Ethiopian Christians share their origin with the other ancient churches.  Ethiopia was, however, physically remote from the other centers of the Church, and it was made even more so with the advent of militant Islam, which surrounded it, even while the Ethiopians repelled it.  Ethiopian Muslims, whose ancestors were long ago welcomed into Ethiopia as refugees fleeing persecutions in Arabia, make up only about a third of the nation’s population, but they are becoming increasingly more violent, fanatical, and assertive, and the reports coming out of Ethiopia are shocking.

East of Ethiopia, across the Mandeb strait, is the Arabian Peninsula.  Here, too, Christianity is as old as the Christianity in Greece or Rome.  In the Bible, we read that Saint Peter preached to Arabian pilgrims in Jerusalem after Pentecost, and that Saint Paul went into Arabia to live among Christians.  But most of Arabia remained pagan, and centuries later, those pagans became Muslims, bursting out of the desert to take over the world.  So much of that ancient indigenous Christianity in Arabia was absorbed, crushed, and obliterated, but nevertheless, a remnant remained.  Oftentimes, the Arab Christians who kept the Faith in Islamic society were well-educated, skilled, and wealthy enough to afford to pay for the jizya tax required of non-Muslims.

Even today, Arab Christian minorities often play important roles of leadership among the majority Muslim populations.  In Israel, Arab Christians are a well-educated minority.  Sometimes called the Rûm (meaning Roman), their ancestors accepted the Faith that became associated with the Roman Empire whose border they now lived beyond.  And similarly, the name Melkite, which means ‘royal’ or ‘imperial,’ also indicates that their ancestors were once supporters of Christian imperial rule.

Today, in Saudi Arabia, Christianity is illegal for all Saudi Arabians, but foreign workers are excluded from this rule so long as they worship in their homes, as there are no churches in Saudi Arabia.  But in Jordan, Arab Christians are well integrated into society and belong to the middle and upper classes.  And many Arab Christians hold high-ranking positions in Palestinian society as well.  Speaking in Arabic, they use the word “Allah” for God, as they have long before the emergence of Islam.

As Roman Catholics, we tend to see our culture based primarily upon our shared experiences from Western culture, which is only natural.  But it is good to remember that our Christianity comes from the East, and that it is just as at home in Africa and Asia as it is in Europe and the Americas.  When we watch the news today, we see how these ancient Christian communities are suffering under war and persecution.  When the prayers of our community go up through the smoke of the incense we burn week after week, let us include with those prayers a prayer for the suffering Church in the lands from whence comes our incense.  And let us endeavor to become a pleasing fragrance of holiness before the Lord together with them, who are, in so many ways, like unto a holocaust in our modern times.