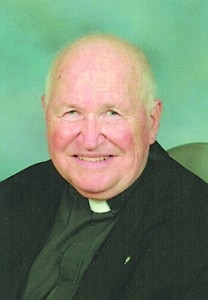 Father Denis Kolumber died some months ago (May 16th, 2014), and soon thereafter, at the suggestion of Fr. Byrd, the Pastoral Council voted to rename our Parish Hall after Father Denis, to honor him and the other LaSalette Fathers who were part of the founding of our parish.  The Knights of Columbus donated towards the material for the beautiful new sign that our parishioner, Mr. John Roger, has created.  You’ll find the sign on the wall of the stairway going down to the Hall from the Narthex.

Weekday Masses were often celebrated by Father Denis and afterward he would take Communion to the sick and homebound, and those living in nursing homes and assisted living homes.  This was one of Father Denis’ great loves, taking Our Lord to those who could not come to Him.  Although he walked with a cane and had difficulty speaking due to a stroke suffered years before while serving in Argentina, Father Denis could be found almost daily traveling the roads of the surrounding counties transported by a dedicated crew of drivers from the two parishes.

Father did not cook, so he was well known in the Jasper eateries and even has a chair with his name on it at the Carriage House Coffee Shop!  His favorite dessert was vanilla ice cream and no matter what was served, it was his way to finish any meal.  Father Denis was much loved by the Hispanic Community and the love was mutual.  He welcomed the immigrants and heard confessions with ease after having spent 17 years of missionary and formation work in Argentina (where he was elected regional superior).  Our Hispanic liaison, Leyda Rojas, wrote, “I remember driving him to other parishes in Dalton and Cartersville so that he could do Penance services and then going to eat at Buffalo Wings.  Oh man, did he love that place!  He would always order the same thing and have vanilla ice cream (two scoops).  He was a very nice person, very kind and honest.  He would take out his little booklet and check for the right amount to tip the waitress.  Father Denis was a great friend to the community and he is missed.”

One of Father’s favorite things to do was to join his parishioners for a potluck meal in the Parish Hall.  He would make the rounds of the tables and speak with as many as he could, just keeping “in touch” with his people.  How appropriate, then, that our Parish Hall will now be named in his memory!

When Our Lady of the Mountains was made an archdiocesan parish, Father Denis was transferred.  He still kept in touch by Christmas cards and by sending postcards from the various places he visited.  And, he still has a warm place in the hearts and memories of those who knew him.