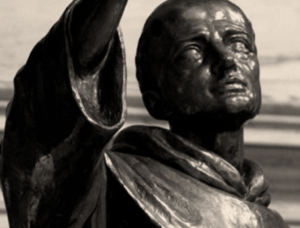 Those who have visited our nation’s capital may remember Statuary Hall, where statues of prominent Americans, two from each state, stand honored.  But in the tomfoolery world of Left Coast political correctness, some in the California assembly have decided that the “Apostle of California” and “Father of the Missions” (as he was the founder of a string of missions along the coast of California, most of which became major cities), Father Junipero Serra, should no longer represent California in Statuary Hall.  The statue of Father Serra has stood in the Hall for over eighty years, but they want to replace it with a statue of someone being billed as the first LGBT astronaut, Sally Ride.  This swap is being initiated by an LGBT Democratic state senator who claims that part of his reasoning is that Ride was a native Californian, as Father Serra was not.  How utterly ironic, given that California was first a Spanish colony, that Father Serra is perhaps the only Hispanic represented in the Statuary Hall, and that the senator is himself Hispanic, born of illegal Mexican immigrant parents.  But I digress.

The other irony is that they are proposing the replacement of Father Serra’s statue just as Pope Francis, during his visit to America, canonized him (the proposal has been tabled for the moment in deference to Pope Francis’ visit).  So in one sense, Father Serra is to be cast out of the secular halls of our government just as Pope Francis and the Universal Catholic Church celebrate and recognize that he has already entered into the glorious halls of heaven.  Presumably one of the morals of this story is that saints really have no business being in D.C. whatsoever.  Certainly, we hope if this proposal goes through, that Californians find a suitable place for the statue back in in their state, at the least.  And if they don’t want it, we’ll take it!

Still, the rest of us American Catholics should know, admire, and honor Father Junipero Serra.  His holy life is one that we should hold up to our children.  Hispanic Americans in particular should be proud of him, though of course, Father Serra belongs to all of us as a founding father in the new world, and as a great Catholic missionary with such amazing courage.  And while it is true that an astronaut must be brave to leave the earth’s atmosphere, astronauts also usually return.  We should remember that Father Serra went to the edges of new worlds and he never returned home to Spain, but spent his whole life for Christ as the founder of one of our nation’s most influential states (for better and worse).  He not only founded many of the missions that would become its most significant cities, but he also baptized over 10,000 Christians there.

Thought of as controversial today, as Californians look back judgmentally with their present biases and sensitivities, we should remind ourselves that if only sinless people get into heaven, then none of us are going to make it.  Candidly, being named a saint says as much about God’s mercy as it does about the lives of the saints.  Nevertheless, this Father of California’s life and holy death, and the touching and mutual love he had for his flock (and they for him) are testimony to this holy man, our latest American saint.

Saint Junipero Serra, pray for us.  Our poor country is going to need it.

Those who want to know more can try the website stjunipero.org.