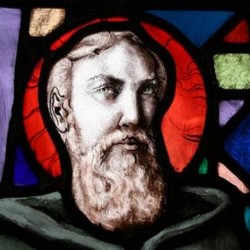 It may be politically incorrect to say so, but really, Islam was militant from the get go, quickly taking over the historically Christian lands in the Middle East and in Africa.  In short measure, Islam drove its way north through Europe, into a region that seemed ripe for the taking.  The old imperial authority had moved east to Constantinople, and subsequent waves of heretical or heathen barbarians had overrun what is today Western Europe.  There was still the memory of order, but while there were still Catholics here and there, old Europe was in reality a chaotic world.  The Merovingian dynasty had been a moment of hope, but it seemed to be collapsing, and with them, any hopes of an organized defense against Islam.  Or so it seemed.

But then on October tenth in the year 732 something remarkable happened.  A Frankish mayor, Charles Martel, stopped Muslim invading forces in their tracks at the Battle of Tours.  That Christian victory was one of the events that set into motion what historians call the Middle Ages.  Now Northern Europe could remain a safe zone for Catholics.  The old Roman Empire had fallen into ruin, but folks began to dream that a new Christian Empire might somehow rise up in the North to fill the power void.  But it wasn’t enough just to win a victory.  If Christendom was going to survive, it needed renewal.

Thus was born what is called the Carolingian Renaissance, and essential to this rebirth and flowering of culture was the Gospel.  Education reform, liturgical reform, architectural advances, artistic revival, peace and prosperity were all part of this renewal, but they were secondary to (and only possible through) this re-evangelization.  Charles Martel, and his famous grandson and future successor, Charlemagne, understood that the social unity and stability they hoped for required faith, and so they sent for missionaries to come from western lands to preach the Gospel and establish the Church.

One such missionary was Saint Boniface, a highborn Anglo-Saxon turned Benedictine monk who was summoned by Charles Martel, and commissioned by the pope in Rome to preach the Gospel.  Boniface saw the Germans as his kith and kin, as his own Anglo-Saxon people had German and Frisian ancestry, and had come from those lands to Britain some generations earlier.  Now the Anglo-Saxons were Catholic, so Boniface had a desire to go back to his people’s ancestral homeland to preach the Gospel.

Sadly, modern secular Germans today might know nothing about Saint Boniface, but he was the Apostle to their ancestors.  He was the first to organize Christian communities in many parts of what we today call Germany (though at the time it was part of the Frankish Empire).  As the patron saint of Germany, Boniface was the Archbishop of Mainz, which was the cathedral at the epicenter of the evangelical efforts to the German and Slavic peoples.  Mainz would be seen as almost equivalent to Rome’s authority north of the Alps (and centuries later, it would be there where Gutenberg would print the first Bible).  But Boniface not only preached the Gospel and organized the Church; he also helped to bring unity to Europe.  This was the political gain to the emerging Holy Roman Empire — renewal had to happen hand in hand with piety and faith.

One of the most famous stories about Saint Boniface is that of Donar’s Oak.  This tree was sacred to the cult of the pagan god Donar (or Thor).  Boniface had this tree cut down and used its wood to build for the Frisians a church that he dedicated to St. Peter.  In our stained glass windows, Saint Boniface is shown holding an axe to remind us of this tree (and the accompanying paganism) that he brought low.  The pagan Germans were then baptized and became amazing Catholics in short order.  They would, in turn, send forth many missionaries from their own ranks out to the entire world.  Thus does the Kingdom of God march on through the rise and fall of empires and amidst the wildly fluctuating vicissitudes of human history.

Today, we are not much different.  The decadence of western culture indicates we are again in decline and vulnerable to militant Islam.  Paganism, atheism, and indifference increase in this creeping chaos of collapse.  And the Church is looking once again to reinvigorate and revitalize the culture with a renewed evangelization.

This is why St. Boniface is in one of our stained glass windows – to remind us of where we have been and to challenge us to be bold in our own age in the proclamation of the Gospel.  Saint Boniface was martyred for the Faith in the year 754.  His feast day is June 5th.

Saint Boniface, pray for us!