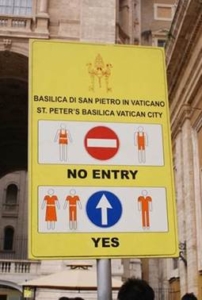 Before the temperature gets warm, it might be a good time to talk about proper attire for Mass.  As a native Georgian, your pastor finds it interesting when folks complain that Georgia is too hot to dress up.  For one, I have lived up north where people also dress down.  What’s their excuse?  It is too cold!  But always in the back of my mind I am remembering all those antique photo albums my mother has with pictures of my long-time southern family handsomely attired throughout the year.  They lived before air-conditioning, of course, but they understood how to look respectable and even elegant.  These days I am always slightly bemused when folks complain about the air-conditioning in the church being too cold given that most of the time they are wearing shorts.

Admittedly, I grew up in a traditional, old southern town where most folks I knew still dressed up to run to the bank or to make a trip to the grocery store.  In my hometown, dressing up was not about flaunting wealth, because most of my fellow citizens weren’t overly wealthy, and some of the best-dressed people I knew were relatively poor.  Frankly if folks dressed to flaunt wealth, they were generally seen as silly.  Where I grew up the art of good taste was more about blending in than it was about standing out, and dressing appropriately was (and is) a sign of respect for the community we are proud of, but also a sign of our own self-respect.

These days, by comparison, there is almost a studied casualness, and I would say particularly among many Catholics as regards to Mass.  Photographs from the 1950’s and the 1960’s indicate that Catholics used to clearly dress well, but something happened in the 1970’s and some of us have yet to recover.  First of all there was the sexual revolution when the social ideas of modesty were challenged to the limit.  But that same generation also pressured nuns to stop wearing their habits and pressured priests to stop wearing their cassocks, collars and even their chasubles.  The pretty chapel veils went out (indeed, even the word or concept of “pretty” and “handsome” seemed to be anathema).  Women of that generation were supposed to stop wearing gloves and hats, and men were supposed to stop wearing suits or polishing their shoes.  And the arts in the Church reflect these strange social pressures.  Instead of rich vestments, our parishes tended to buy sackcloth and burlap vestments.  There is a story (presumably true) from one nearby southern city where an Episcopal parish rescued priceless, antique gold vestments that had been tossed into the rubbish bin by a neighboring Catholic parish.  What was all that about?

And so now, among some, there remains this strategic or contrived casualness.  It is almost as if some Catholics think it would be morally wrong to dress up for Mass.  It is as if they imagine that it is somehow spiritually better to come to Mass in blue jeans.  If there was social pressure in the 1950’s to dress up for Mass, there is among some today a kind of social pressure to dress down for Mass.  I have to wonder sometimes what our Protestant neighbors must think of us.  They pour into their churches looking sharp, with blazers and ties and dresses, and by comparison some of us might look like we’re still in our pajamas.  I know this is a prickly subject, as it is hard to talk about something as seemingly frivolous as fashion, but clearly it needs to be addressed somehow.  While personally I think our parish is better dressed than most, we as Catholics still might think more about how we come attired to Mass.  Do we have a prejudice to dress down, and if so, why?  What’s going on there?

Theoretically, with men all of this is easier.  Men tend to be less interested in fashion and less sensitive about their clothes or their appearance.  Most men are okay being told what to wear by their wives.  Men’s fashions evolve slowly, and most men would wear the same clothes every day if we could.  Men gravitate naturally towards almost a uniform look.  These days, when so many young men wear caps, we might need to remind them to remove their hats when they come into church, but this is not really just a matter of fashion etiquette for us so much as it is a biblical notion – Christian men should pray with uncovered heads.  Thankfully most men after a certain age choose to wear trousers and sleeved shirts, so that is not usually an issue, at least here.  Nevertheless, whenever I travel overseas for a pilgrimage with Americans I do have to remind them not to pack shorts (or we won’t be able to get into any of the churches)!

With the ladies, on the other hand, there are more issues.  First of all, women are more fashion conscious than men.  There is a lot of pressure on women to look current, with hemlines and necklines that go up and that go down with every new season.  There is also pressure for women to show more skin.  Even a so-called conservative news station must put clauses into the contracts of their lady reporters that dictate they can only wear long tank tops on air.  It can be the dead of winter but the poor anchorwoman is presumably forced to wear a sleeveless, backless and amazingly short dress, even as she delivers the news sitting on a stool behind a glass desk.  These are smart ladies, too, and I will admit attractive, but the men they sit next to are in suits and ties.  If those men were told they could only come on air in short shorts and a tight tank top, my guess is the world would think that ridiculous.  Thus women’s fashions are more difficult to regulate.

Certainly young women and men are more influenced by fashions, and they are especially susceptible to the antics of popular celebrities who can have all the modesty of streetwalkers, or who wear clothes that make them look like they’re in a gang.  Our children are also being pressured towards immodesty.  I will never forget a tacky saleswoman once asking my seven-year-old niece if she was looking for an outfit to catch a boy.  I’m not kidding.  She actually asked my niece that question right in front of me.  We live in strange times.  So how can we help folks appreciate what is appropriate to wear for Mass when society is so over-sexed and when styles are so fluid?

It is not an easy question to answer.  In part this is because with the breakdown of Christian morality, there is an accompanying collapse of social mores.  Admittedly etiquette is more of a fixed social construct than constantly fickle fashion, but etiquette also evolves on some level, so that makes it difficult to say exactly what is appropriate for Mass and what is not.  Most men cannot answer this question at all, and simply know better than to try to critique women’s clothing, but pastors will occasionally be all-but-ordered by lady parishioners who want us to tell other women in the parish that they should not wear such-and-such.  The Vatican has actually tried to issue guidelines in generations past which looking back seem quaint, as if some edict of the Vatican could hope to freeze women’s fashions.  Yeah, right.  So as your pastor, I am reluctant to start saying women should always wear this, or never wear that, but if one needs a guide then consider Jacqueline Kennedy, or Princess Grace, or even the present Spanish royal family.  They are an elegant lot who can teach us something about the appropriate clothing for Mass.  There are also some websites on Catholic modesty that folks might like to reference (though I am not endorsing these as anyway official).

And while we’re on the subject of ecclesial fashion, allow me to say a word about chapel veils here.  Once it was mandatory for Catholic women to cover their heads when in Mass (which, let us be clear, is a Biblical principle).  Chapel veils are no longer worn by the majority of Catholic women today, but I would like to point out that a chapel veil is not a sign of a misogynistic Church that does not value women.  The Jewish men in the Old Testament covered their heads when they prayed, so clearly this idea is not about sexism.  Moreover, in Catholic tradition, we veil holy things, like the tabernacle or the chalice, so we should never think that women had to wear veils because they were considered less holy than men.  Most Catholics know that women tend to be holier than their husbands as a general rule.  So if some of our parishioners choose to wear the chapel veil to honor our Catholic traditions, don’t think for one moment that those women are weak, because they are anything but.

Still, what is the bottom line here?

Well, we should probably start by admitting that we, as American Catholics, have gotten sloppy.  This is not genetics.  We can be very smart dressers, but in recent years we have become overly relaxed about dressing for church.  Just consider that most of the signs at the Vatican that enforce proper attire are in English.  That is because it is the overly-casual Americans who tend to be the worst offenders in the wearing of shorts or tank tops.  Sad.  So, perhaps as a general rule of thumb let’s admit that if we couldn’t get past the papal guards into St. Peter’s Basilica based on our outfits, then we probably shouldn’t be wearing that same outfit to Mass in Jasper either.  For the record, I would like to point out that is not because we Catholics are prigs.  I mean, really!  Just how many statues and frescos of naked people are there in the Vatican?

No.  Dressing appropriately is about dignity, decorum, and respect – respect for ourselves and respect for others.  Let’s face it.  Our worship is formal…it isn’t informal and it isn’t casual.  Moreover, as Catholics we are citizens of the City of God.  That should make us proud!  For that reason alone we should try to look sharp.  Certainly this does not mean that we should always have to wear suits and ties or gloves and hats.  Nor does it mean we should ever be rude to anyone because we judge their clothing to be inferior to ours (either too casual or too formal).  Frankly, I don’t care how nicely someone is dressed; if they are rude, then they are tacky.  And another thing, let’s keep in mind some folks have to work on the weekends, so they should never feel unwelcome because they have to come in their work uniforms.  But what this really means is that more often than not we Catholics should try to come to Mass looking handsome, and not like we just jogged here from home.  We need to get past that rebellious 1970’s notion that it is bad to dress up.  And let’s admit that it is okay if we Catholics allow ourselves to have a little class and style, even in the summer. 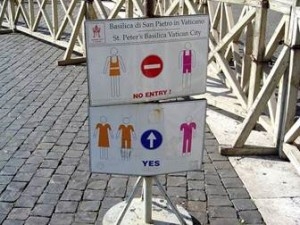 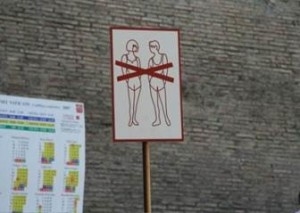