Defend Us in Battle 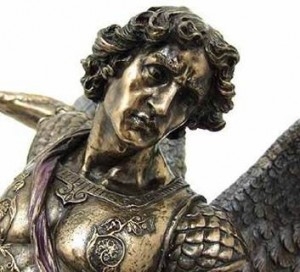 Now and then, we may realize that we are very much under what we call spiritual attack.  In reality, we are almost always under spiritual attack, but it isn’t always palpable.  Most of the time, this conflict is a psychological or intellectual war wherein evil tries to gradually increase influence over our lives.  This is most often a covert cold war of attrition, with no clear fronts.  It is more terrorism than ground warfare, more coercion and corruption than frontal attack.  We can think of it as a stealth war to undermine our watchtowers and infiltrate our ranks with propaganda to encourage us towards appeasement, so we will lower our guards and eventually just leave the gates open.  This is how most are defeated, too – not so much by direct attack, but rather from within.

But now and then this spiritual battle heats up and we can feel truly under attack.  To that end, we need to understand some basic realities about this constant state of warfare.  First of all, the first rule of war is to know your enemy, so it would be wise for all of us to start by understanding what the Church teaches us about the devil, hell, and spiritual battle by reading the Catechism (specifically paragraphs 391-395, 1033-1037, and 2850-2854).  You should definitely start there.

Next, we need to understand that the devil is real.  Think of him as a drug dealer.  Drug dealers can drive expensive cars, wear glamorous clothes, and are afforded a certain aura of dark authority in our neighborhoods, but they can’t really make us buy their product.  They tempt us, but don’t force us.  And what they sell is a lie – they sell narcotics as a glamorous escape or trip, but in reality, drugs are a trap that leads nowhere.  The drugs can make us feel ecstatic or elated, but in reality they bring us down.  Users may voluntarily surrender their wills to drug dealers by buying their wares, and then in time, users find themselves in debt to their dealers.  Thus, the dealers have real power over their lives.  Dealers can then make users do bad things, and users can make others do bad things.  Drugs will turn users into liars, and make them cynical about life and the future.  As such, users can lose ambition to be holy, healthy, or whole.  Of course, users work for their next fix, so all that money is making the dealer seem even more powerful in the streets, because everyone seems to owe him, especially as more and more users grow more and more addicted.

Addicts can be highly functioning actors or musicians, or they can be deadbeat homeless people, but they will eventually let drug dealers destroy their neighborhoods, their schools, their families, their marriages, their friendships, their careers, their lives, their children’s and grandchildren’s lives, and their futures.  Still, it must be repeated, users always have the power to resist.

Drugs can also corrupt our systems of moral authority and power, but again, all this sin is voluntary.  The police, the courts, and the politicians can eventually become corrupted, influenced or controlled by those same drug dealers.  It may be because of money, or maybe their own addictions, or perhaps because of their children’s addictions, but by whatever means possible, it can happen.  As a result, drug dealers can make a total mockery of justice and civil authority.  The more we collectively or individually give in, the weaker we become as a society or as a person.  But the more we resist, the less powerful the drug dealer becomes.  And so the drug dealer has only the power we surrender over to him.

In a similar way, the devil is not powerful enough to make us do anything.  But in our society, folks surrender power over to him all the time, and unwittingly become his minions in a million ways.  And so whenever some Catholic is feeling under spiritual attack, the very first thing he or she needs to do is to make an examination of conscience and then go to confession.  We have all sinned and surrendered some moral authority to the devil, and we need to confess that, and be forgiven.  The most obvious sin may itself be a symptom of some deeper, more hidden sin.  Sin leads to sin.  There is sometimes some original sin which needs to be admitted, because it may have had significant influence in our choices.  For example, the drug addict may turn to drugs to forget some other sin he or she needed to confess long ago.

Now, if we can’t see how we have sinned, then chances are we are spiritually superficial and proud.  We may say to ourselves, “I’m good” (which is self-righteousness), but we need to admit, “No, I am a sinner” (and thereby seek out the righteousness of God).  But some folks can be really lost souls falling deeper and deeper into the hole of deceit, so much so that they begin to think that darkness is light.  Sometimes these folks have to fall all the way to the bottom before they can be reasoned with, but even at the bottom, so long as there is life, there is hope (with the prayer of others) that these sinners can eventually start the long climb up from that pit.

The point of all this is that we shouldn’t give the devil too much credit.  If we feel his attack, chances are we have made a lot of compromises along the way, giving up territory.  If we aren’t living our faith, then we are vulnerable.  Sometimes a person will get angry with a priest when that person is under spiritual attack and he or she wants the priest to ‘fix’ things.  Only, the priest comes to find out that this person is living with someone without the benefit of marriage, that their children aren’t baptized, and nobody is going to church.  Folks, priests can’t just sprinkle holy water and make all our problems go away!  But, they can forgive our sins.  If we’re sinning, we need to recognize that sin, and confess it.  First and foremost, we need to change ourselves.

Most of all, the devil is a liar.  He is a creature of empty promises.  He will try to convince us of things all the time, but he will use a web of lies and half-truths to trap us.  There will be lies within lies within even more elaborate lies.  Misinformation is his best strategy.  One of his strategies is to convince us something really isn’t a sin.  It doesn’t matter what the Catechism or the Bible or the Lord said; such and such is not a sin.  We like hearing our sins aren’t sins, of course, and even clergy fall for these tactics.  The devil wants us to conclude that there is no right and wrong.

But then, once we’re trapped in sin, the devil can turn around and tell us that our sin is so egregious that it can never be forgiven.  He wants us to despair of forgiveness.  One of the biggest lies he tells in countless ways is that we are too worthless to know God’s love.  The devil hates God, but he hates us more, because he is jealous of the divine love we receive undeservedly from the Lord.

The devil is very much a double agent infiltrating our lives (often at our invitation).  He will masquerade as a friend, or as an angel of light.  Consider that the artist William Blake depicts the devil not as a red, cloven-footed demon, but rather as a heroic, beautiful, enlightened figure, not because the devil is heroic or enlightened, but because the devil presents himself as such.  The devil is a liar!  He can seem reasonable, but remember, he is all deceit.  And he ultimately wants our deaths.  Remember that our Lord called the devil “a murderer from the beginning.”

Our baptism rite for children involves an exorcism and is clearly focused on rejection of the devil as we accept the light of Christ.  Nothing makes it more clear that our lives, as Christians, are lives that begin in a spiritual battle.  So let us briefly reflect upon these questions from the baptismal rite of our church:

2)      Do you reject the glamor of evil and refuse to be mastered by sin?

3)      Do you reject Satan, the father of sin and the prince of darkness?

Those are some powerful questions in our modern times.  Let us end with that prayer to St. Michael, which we, as a parish, pray at the end of our daily Masses:

St. Michael the Archangel, defend us in battle.
Be our protection against the wickedness and snares of the devil.
May God rebuke him, we humbly pray;
and do Thou, O Prince of the Heavenly Host,
by the Power of God, cast into Hell Satan,
and all the evil spirits who roam about the world
seeking the ruin of souls.  Amen.