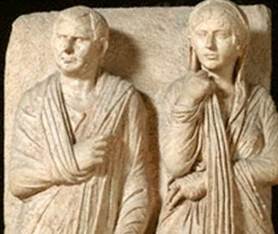 As Catholics, we have two thousand years of history behind us, so we often come across as traditionalists or conservatives.  But we can forget that while our Catholic Faith is older than all our world governments, it is still something radical that challenges governments as it stands above them all, and is destined to outlast them all as well.  In the many columned halls of political power, there are countless who strategically seem to be virtuous for the sake of their own political careers, or for the sake of what they imagine to be the greater good of the republic or the empire.  They may be politically conservative, but that isn’t the same thing as begin a disciple of Christ Jesus.  Often these folks cannot see beyond the political realities of their day, the polls push them along, the changing whim and will of the emperor of the day informs their decisions.  In such people their gaze can rarely see into the eternal.  For them there is only the here and now.  Thus when something really new or really important comes around, these folks remain trapped in their own system of partisan thinking, and they lack the courage to embrace something radical which could jeopardize their positions in society.  Still, there are remarkable exceptions in every age, including the apostolic age.

Senator Quintus Cornelius Pudens and his wife, Priscilla, were just such exceptions.  They were among the first Romans to be converted by the Apostle Peter, and they opened their home to become one of the first house-churches in Rome.  It is often repeated (perhaps in an attempt to discredit our Faith) that the first Christians were slaves.  It is true many early converts were slaves, but Cornelius and Priscilla remind us that early Christians were also among the ruling classes, and that in Catholicism both master and slave became disciples together.

So it was in the home of Cornelius and Priscilla where our first pope, St. Peter, lived and taught.  Thereafter, for nearly three hundred years, the Pudens’ home was the home of the popes and served as the cathedral of Rome.  St. Paul mentions a Pudens in one of his epistles, along with Linus (who would become the second pope after Peter).  Priscilla’s wooden table became the altar, and parts of that table are now placed like a relic within the modern-day high altar of the Cathedral Basilica of St. John Lateran in Rome.  Senator Pudens’ chair became the chair wherein the Apostle Peter sat to teach, and Linus thereafter, and subsequent popes besides.  The Pudens’ celebrated children and grandchildren would go on to be declared saints, and today the basilica of Santa Pudenziana is built on the site of their home, and is revered as one of the most ancient parishes in Rome. Indeed, Priscilla must have been a force of nature in her own right, for she courageously saw that the Christian martyrs were piously buried (including her own husband), and her family crypt eventually became the antechamber to one of the oldest and largest of the Christian catacombs in Rome:  the Catacombs of Priscilla.

Cornelius and Priscilla are important for historical reasons, but they might also appeal to us for contemporary reasons as well.  First, here is a married couple, laypeople who were prominent leaders in the early Church, and without whom, history would have been quite different.  Too often Catholics look for leadership only from our bishops or priests and forget that clerics are servants to the house of God, and in many ways, dependent upon the competent leadership of the laity, who are likewise stewards.  So, secondly, we might think of the Pudens family as the patron saints of the Domestic Church (not officially declared as such, but it is one way to understand them, as we begin more and more to support the Domestic Church in our own parish).  Stewardship is also a way of looking at them.  The Pudens’ not only remind us that our earliest churches were house-churches, but they also remind us that our parishes are homes, and that we are, each and every one, responsible for providing for these homes for our Lord and for his priests, and showing hospitality towards those of the Faith.  So when it comes to stewardship, we as Catholics can learn a lot from our ancestors in the faith, the Pudens’.

Lastly, the Pudens family might be looked at through the lens of the New Evangelization, because the Pudens’ also remind us that our Catholicism challenges the world in radical ways.  Senator Pudens and his wife Priscilla opened up their home to Simon Peter, a rough, unshaven, rustic Jewish fisherman who had been the disciple of Jesus, the Christ, whom the Roman authorities had put to death.  Peter was the known accomplice of the Christ and would see the inside of multiple prisons in his lifetime.  The Pudens’ were essentially aiding and abetting a marked man, and thus living in open conflict with some pretty tyrannical emperors.  Our Lord, the Galilean, had proclaimed a gospel that challenged the imperial worldview of Rome, with their many pagan gods and goddesses subordinated to the state.  In their day, it was Pontius Pilate who was the conservative, but Cornelius and Priscilla were risking all their accumulated family wealth, prestige, and power on the word of the Apostle Peter, and his testimony of the risen Christ.  We can only imagine how that must have felt, to be a part of the nascent Church, surviving on the testimony of the most remarkable news taken around the world outside of official sources.  Today, our Faith is so ancient, but for Cornelius and Priscilla, it really was “news.”