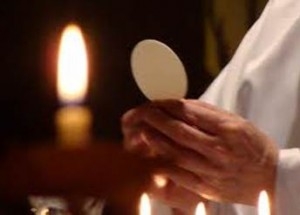 A Catholic priest I know recently went to a funeral at an Episcopal Church and the cleric who presided over the communion service made a point to invite “all present” to come forward to receive their communion.  While she may have been focusing her invitation primarily towards the Catholic priest (who did not go forward), it was obviously inconsequential to her if those invited forward were baptized or not baptized.  As we mark the sad anniversary of five hundred years of Christian division that started with the formation of Protestantism, we see more and more Protestants becoming “non-denominational” Congregationalists, so their old distinctions matter less and less to them.

Today an Anglican cleric can preside over a Lutheran service, and a Lutheran cleric can preside over an Episcopal service, and few care about the passé mainline denominations anymore (many of which are disappearing.)  In such a world where “all” are included in Protestant communion services, it sometimes seems that we Catholics are being exclusive, what with our strict rules about who can receive Holy Communion and who cannot.  But it is important to remember our own history, and even if the old Protestant denominations are collapsing into one group (or are they splintering into countless groups?), we still need to appreciate that Catholics are different and we have a responsibility to remain in Communion with the universal Church.  So then, perhaps we need to review what being “in Communion” really means for the Catholic.

Let us ask ourselves first, do we as Catholics really understand our own Church’s teaching on the Eucharist or Holy Communion?  Do we know what the Church means, for example, when She tells us that Christ is truly present in the Eucharist?  Have we read theCatechism of the Catholic Church on the subject of the Eucharist?  Our Catechism specifically reiterates what we have been taught since the first century of Catholicism – that the Eucharist is, at one and the same time, a sacrifice, a sacrament, the Real Presence, Communion, and a pledge of future glory!  But do we understand this ourselves?  For example, do we Catholics know that we should be discerning about our own reception of Holy Communion?  Do we know we must be in a state of grace, that we must have fasted for an hour, and that we must be in the right disposition ourselves in order to receive worthily?

And these are not new teachings!  Have you ever heard of Saint Ignatius of Antioch?  Saint Ignatius (d. A.D. 107) received the Faith from the Apostles themselves, and Ignatius of Antioch’s letters are pretty clear about Catholic teaching regarding the Church and the Eucharist.  Ignatius identifies the Church as “Catholic,” and he recognizes the importance of being in Communion with our Catholic bishops and in Communion with the Church in Rome.  Moreover, Ignatius tells us in no uncertain terms that those who do not confess that the Eucharist is the Flesh of our Savior should abstain from receiving the Eucharist.

But what do Protestants believe about their communion?  Likely that depends upon the individual Protestant.  It is doubtful that every Protestant believes everything the founders of their denominations once taught.  But it is still helpful to know what official Protestantism taught, at least in the beginning.

Another thing is clear.  Those Protestant founders denied the Catholic Church’s teaching on the Eucharist.  Martin Luther, the founder of Lutheranism, denied the teaching of “transubstantiation.”  Luther’s beliefs morphed over time, but he more or less believed Christ was present everywhere (thus ubiquitous), and so he could reject the uniqueness of the Eucharist, all the while still supposing a kind of spiritual communion (that Christ was present with the bread and wine).

We also know that John Calvin, another Protestant founder, believed that his communion was merely symbolic.  So Calvinists, Presbyterians, and Puritans consumed just bread and wine, but they believed that Christ was present in their community.  By the way, Calvin was so embarrassed by St. Ignatius of Antioch’s Catholic witness that Calvin insisted that Ignatius’ writings were not true.

We know that the official founding documents of a third branch of Protestantism (the Anglicans and thereafter the Episcopalians, the Methodist and the A.M.E. denominations) rejected our notion of Eucharistic Adoration, Benediction, and reserving the Eucharist once it is consecrated.  Those denominations also rejected our Church’s teaching on “transubstantiation” by name, calling it repugnant and superstitious, and saying that they receive communion only in a “spiritual manner.”

Finally, Baptists don’t even call their Lord’s Supper a sacrament (they refer to it as an ordinance, of which they argue there are only two – the Lord’s Supper and Baptism.)  Most Baptists believe that these are not sources of grace, but mere symbols, and they would not have any notion of hosts being consecrated, nor that once a host was consecrated, it should be reserved in a tabernacle as unique or special.  And Baptists (like many Protestants) rarely take communion in their weekly services anyway.  They might go months between their commemorations of the Lord’s Supper.

Historically speaking, Protestants would see our Catholic notions of Christ being present in the Eucharist as shocking.  A hateful 1988 tract from Chick Publications depicts a demon coaxing a pope to fool stupid Catholics into believing in transubstantiation, implying that Catholicism is from the Devil and calling the Eucharist “The Death Cookie.”  Now, most Protestants would insist that this bigoted view is a hateful example of an extreme fanatic and it is certainly not their belief, and thank God for that.  Still, it remains that Protestants do not have the same understanding of the Eucharist as we have.

Protestants are our brothers and sisters in baptism.  They are our friends and neighbors.  They are in our families.  They may be sleeping in our beds.  We have a shared heritage.  I believe we have a shared future.  We love them.  We want them to go to heaven.  We welcome them to our parish.  And we would love for them all to become Catholic, but sadly division remains.

So to deny these divisions would be pointless.  And to invite “everyone” (non-Catholics, the un-baptized, or for that matter anyone) to receive the Eucharist would be an act most uncharitable.  We have Protestant parishioners who come to Mass week after week.  They come with their Catholic spouses or families, and they never receive Communion.  Perhaps this is because they remain unconvinced of the Real Presence.  Perhaps they disagree with some other teaching of the Church.  For whatever reason, we need to respect them, because on some level this is, in its own way, demonstrating a deep respect for not just their conscience, but also of our Church’s teachings.  They are in many ways a part of us, even as they stand aloof, while all the while the Lord draws them in.  God bless them!

So with regards to Protestant reception of Holy Communion, we cannot deny the diverse histories of Protestant rejections of Catholicism.  If Protestant communion is just a symbol, no wonder our Protestant friends think it no big deal to open up communion to anyone.  But if Communion is the Presence of Christ Jesus among us, and a sign of our unity with the Universal Catholic Church, and if we work hard so that not the slightest crumb of the Blessed Sacrament should be dropped upon the floor, well then clearly, Catholics believe something different when it comes to our Communion.

And so we end with this sobering quote from the Apostle Paul.  He writes these words in his First Epistle to the Corinthians, 11:27-29:

“Whoever eats the bread or drinks the cup of the Lord unworthily will be guilty of sinning against the body and blood of the Lord.  All should examine themselves prior to partaking of the bread and drinking of the cup, for those who eat and drink without discerning the body of Christ bring upon themselves judgment.”