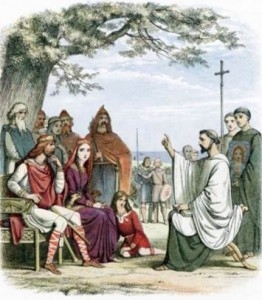 In the year A.D. 597, Pope Saint Gregory the Great, burning with zeal to win the hearts of the Anglo Saxons to our Faith, sent from Rome Saint Augustine (aka Saint Austin), together with 39 other Benedictine monks, to the shores of Kent to preach the Gospel.  St. Austin took with him a number of tools to help him in his preaching of the Gospel to the English pagans.  History records that he and his monks came in Roman fashion, processing behind the standard of a silver cross, chanting as they walked.  They also took with them an icon of Christ our King and Savior, about which we can only speculate as to what it might have looked like (perhaps like its contemporary 6thcentury mosaic of Christ in Ravenna?).

Saint Austin and his monks met the pagan king, Saint Ethelbert, beneath a spreading oak.  The heathen king was wary of Roman “magic” and felt safer beneath the open sky.  With polite deference, Saint Austin, through an interpreter, explained how Christ had redeemed the world from sin through his agony upon the cross and thereafter opened heaven to all believers.  The king, at first unmoved, nevertheless welcomed the strangers to his capital of Canterbury and granted them permission to preach.  In time, the king would himself accept baptism, but first the Benedictine monks set up a monastery, and began to chant their psalms.  They preached in the small royal chapel of the queen, Saint Bertha, which had been dedicated to Saint Martin.  The monks also built their own chapel and dedicated it to Saint Pancras, whose relics they had brought from Rome.  Saint Austin also brought with him an illuminated and illustrated book of the Gospels.  This manuscript, which survives to this very day, was given by Pope Gregory himself.   By Christmas day in 597, some ten thousand Saxons had been baptized by Saint Austin.  Austin died shortly thereafter in 605, his feast day being May 26th.  What then can account for his remarkable success?

In the war chest of Saint Austin, he had brought the Gospels, a cross, an icon, some relics, some books of chant for praying the office, and that which was necessary for offering the Holy Sacrifice of the Mass.  To us, as Catholics, these might seem like ordinary enough items, and yet, by grace, something remarkable had happened in Kent in the golden, autumnal light of A.D. 597.  A heathen people, heretofore unfamiliar with Christ, learned in short measure to become followers and disciples of Jesus.  What lessons might we learn from this look back at history?  What tools do we use today in presenting our Faith to others?  Might we be over thinking?

Saint Austin introduced a pagan people to Christ through means we Catholics have used for centuries.  They were aided by the prayers of Saint Gregory, whose paternal love extended beyond the Alps and over the Channel to a people he could not see, though whom he held dear.  Of course, the Lord had prepared the hearts of these Anglo Saxons for this tremendous grace.  And in time, English Catholics would be sending missionaries, carrying with them the same tools.

English Catholicism thrived for just shy of a thousand years prior to the forced break with Rome by the Tudors, King Henry VIII and Queen Elizabeth I.  With that, the old Benedictines were rooted out and sent packing, their monasteries ruined, their books and art burned, the saints’ tombs desecrated.  The Protestantism that emerged has historically prided itself on compromise and taking a middle path.  They have bent to most every progressive issue they could in a misguided attempt to keep up with the times, but now statistics indicate that Protestant ecclesial communion is essentially imploding.  Evidently bowing to every moral compromise of modernity was not the panacea some people thought it would be.  Today, the most common male name for infant boys in Britain is Muhammad.  The Christian future looks grim.  Let us hope that Saint Gregory and Saint Austin are praying hard, for the Anglo-Saxons need a new evangelization in a big way, and these trends in England are but harbingers to the rest of the Western world, if we do not awaken.

Today, when we Catholics start to talk about evangelization, we can end up concluding some rather odd things.  The room can be filled with bishops, priests, and other fine folks with impressive degrees, but somehow the solution that gets recommended by these committees is that we need more committees to build a consensus on how to proceed, or that we need to make our Masses an “experience” for the people in the pews, maybe use more guitars and less sacred music – essentially, that we need to become more like Protestants.  Really?  One wonders how the apostles managed what they did before the invention of the guitar.  And however did Catholicism spread, build great universities, cathedrals, hospitals, and fill libraries with books, and compose volumes of music prior to emergence of Protestantism to show us what to do?

Ok, that’s too glib, but the point is that we need to reflect more on our own history, and reconsider the missionary saints of old, so as to learn from their experience.  There are many saints we might consider, like St. Paul, St. Martin, St. Patrick, St. Boniface, St. Francis Xavier, and St. Junipero Serra, to name just a few.  As we consider evangelization in the weeks and months ahead, we might look to these great missionary saints to learn from them how we might best present the Gospel in our own times, and in a way that is authentically Catholic.

Saint Gregory and Saint Austin, pray for us!