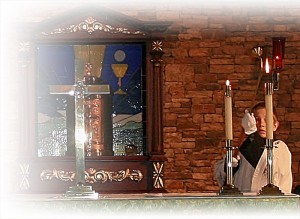 We know that we are biased, but we believe we have the best group of altar servers in the Archdiocese. Our servers know what they are doing, they look sharp, with an esprit de corps, and they have a passion for adding dignity and solemnity to our liturgy. Their signature white gloves really are the added flare that sets them apart from the average altar servers.

Those interested in becoming an altar server should be baptized Catholics who have received their first Holy Communion. They should be individuals who strive to live a moral and faithful life, and they should be persons who avail themselves regularly of the sacrament of reconciliation.

Our servers are assigned ranks:

Keep in mind that this ministry of service is also a school of discipline for leadership. We learn so that we can teach. We serve so that we can lead. Thus, our servers learn the various server roles over time (candle bearer, crucifer, book bearer, and thurifer). They are expected to come to bi-annual trainings and/or retreats, and if asked, may be expected to come to a rehearsal for an occasional special liturgy. At OLM we use sacring bells, so our servers need to know this skill. Our parish also uses communion patens, so our servers will learn this skill. In many of our liturgies we use incense, so some will be expected to master this important skill in time. Another skill all servers must take seriously is their responsibility for their vestments, which all share, and so everything should be left hanging in the closet in excellent order and condition for the next team of servers.

It almost should go without saying that our servers should always be attentive to the posted ministry schedule so that we can count on you to be present at your appointed times. If you and your family cannot make it for any reason, please contact the altar server coordinator or another family to ask them if they can take your place. We want responsible servers. In addition, you must be at Mass fifteen minutes early, vested and ready to help light candles and charcoals.  Collectively, these thing ensure that the Mass will be properly manned with the sufficient number of servers. Each team of servers will generally have someone designated as the lead server, who will help to distribute the roles among our servers and organize them for each Mass. Our servers should come ready to serve with dark trousers and dark shoes that will not look conspicuous beneath their black cassocks or be in anyway a tripping hazard. If a server has long hair it should always be pulled back and out of the way. There should be no conspicuous jewelry, nor bright colors, nor anything that will distract from our uniforms of cassock and surplice.

Also, let us remember that this ministry goes back to the earliest days of the Church, so while it is a great privilege for our young people to serve at the altar of the Lord, it is also a grave responsibility. Be mindful that the server represents Christ in the world and therefore should be a moral and faithful Catholic with an active prayer life. It simply isn’t enough to stand up straight, be sure-footed, and look sharp; we need also be equally serious about our spiritual walk with the Lord, being able to take a moral stand in our world while living an interior life of holiness.