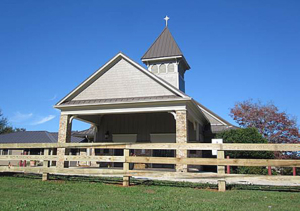 Our Lady of the Mountains was established as a mission church on September 16th, 1984 by Archbishop Donellan with Father Joseph Nolan, M.S., as administrator. Father Joe was also the pastor of Our Lady of LaSalette in Canton. Later that spring we purchased 36 acres of land and a farmhouse where the first Mass was offered in the parlor on October 13th of that same year (with only 26 people in attendance). Within three months the old farm house (currently our parish offices) became too small, so the congregants moved for a while to the Thomas Quinton Memorial Arts Building in Jasper. The Pastoral Council was formed, and then a Building Committee, and by April of 1987 ground was being broken for a new parish church that would seat 190 people. To finance the building almost 29 of the original 36 acres had to be sold. By the turn of the century, our little congregation had continued to grow such that we needed to once again expand the church to seat 500 congregants. This expansion was dedicated on June 13th in 2003, and one year and four days later OLM was designated a parish by Archbishop John Francis Donoghue. The LaSalette Fathers (Fr. Neil Jones and Father Denis Kolumber) had continued to serve our mission up until 2004, when Fr. Frank Richardson became our first official pastor. Fr. Frank served for nearly five years until the arrival of our second parish pastor, Fr. Charles Byrd, who arrived in January 2009, but who was officially installed as pastor by Archbishop Wilton D. Gregory on March 29, in 2009.  With the arrival of Father Byrd, the parish also petitioned the archdiocese for our own feast day to fall on or around the anniversary of our having been established as a mission, so the Holy Name of Mary was chosen, and so declared by Archbishop Gregory to be our official feast day some twenty-five years after that historic first Mass at OLM.