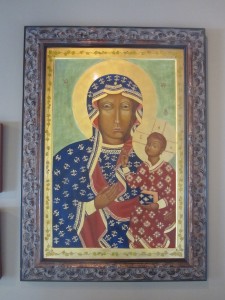 Every parish is supposed to have a feast day, but our parish was named Our Lady of the Mountains, and there was no feast for the Blessed Virgin under that title. With no Marian feast designated to be specifically ours, a committee of parishioners was formed that recommended the Holy Name of Mary. With the approval of Archbishop Gregory, this was established as our official feast. For us the Feast day of The Holy Name of Mary occurs on a Sunday on or around September 11th or 12th. At the time our parish chose it, many Americans had the then recent terrorist attacks of September 11th in 2001 at the top of their minds. It is impressive, really, that our parishioners chose this as their feast day given that fact.  Our feast day nearly coincides with the birthday of the establishment of our parish as a mission, and it also usually falls in a lovely time of the year here in North Georgia, where weekends can be perfect for a parish picnic on the grounds. It is a perfect fit.

But the feast of the Holy Name of Mary also commemorates a victory at the Battle of Vienna. It was a terrible time in our history. The Protestants had abandoned the Catholic Church of their ancestors, and wanted it ruined. Their preachers had declared the popes in Rome the antichrist, and saw the Catholic Church as the whore of Babylon, so the destruction of Rome would seemed to have given credence to their inflammatory rhetoric. This division among Christians in Western Europe meant our civilization was vulnerable. If ever there had been a time when the powerful Muslim superpower of the Ottoman Turks could finally take Europe, it was then, and so they sent Islamic forces up through Austria with their ultimate goal being Rome. But first they had to lay siege to Vienna, in 1683.

The Pope was practically militarily defenseless, but he called upon all Catholics to pray the rosary. Christendom needed a hero to survive, and one was forthcoming in the person of King Jan III Sobieski of Poland who brought with him an army to push back against the Turks. Jan III Sobieski placed his troops under the protection of the Blessed Virgin Mary. His men had stopped to pray before the icon of the Black Madonna in Czestochowa on their way to Vienna, and so to commemorate their miraculous victory on September 11th and 12th, the Holy Father in Rome established our feast day in the universal calendar.

But when the pope established our feast day on the universal calendar as the Sunday within the octave of the Nativity of the Virgin, he was really elevating a feast day whose history went back even farther to the year 1513 in Cuenca, Spain, when it was celebrated locally on the 15th of September. It seems to have been made popular throughout the Kingdom of Spain in the 17th century by the Discalced Carmelites.

Our parish commissioned the beautiful icon of the Black Madonna (our Lady of Czestochowa) to remind us of our feast throughout the year, but come early September, let us celebrate with joy, the miracles that can happen when we, as a people, unite under the Holy Name of Mary in prayer!